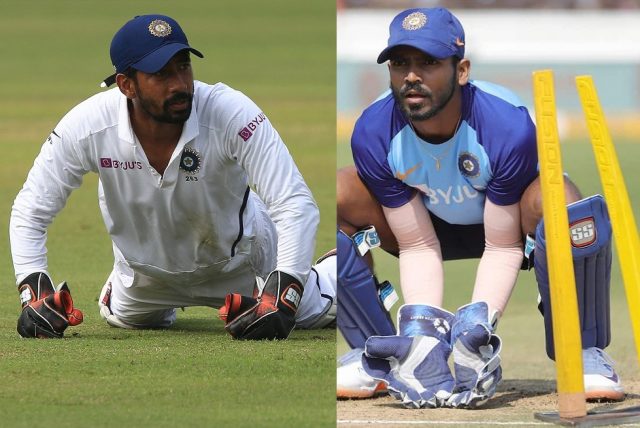 KS Bharat has donned the gloves behind the stumps on day three in place of Wriddhiman Saha who is suffering from a stiff neck. The BCCI medical team is treating him and an update on his health will be given later in the day.

BCCI’s official Twitter handle, gave an update before the start of the day’s play informing about Wriddhiman Saha’s problem. With the bat, Saha scored just one off 12 balls. He was good behind the stumps in the first two days.

UPDATE – Wriddhiman Saha has stiffness in his neck. The BCCI medical team is treating him and monitoring his progress. KS Bharat will be keeping wickets in his absence.#INDvNZ @Paytm

Saha was targeted by the Twitterverse for his failure with the bat in the first innings. They even demanded him to retire and asked the BCCI to given Bharat a chance in the next game.

Wriddhiman Saha’s returns with the bat since 2017 have been astounding low. in 14 innings, he has scored 156 runs with an average less than 15 with a best of 29. He has not hit a fifty in Test cricket since April 2017.

Rishabh Pant has been favour over Saha in the recent past. It is Saha who is a better keeper than Pant as per cricket experts but Pant has batter stats with the bat which is why he has pipped the Bengal keeper in Test cricket since his debut.

In this series, however, Pant was rested due to workload management and thus Saha was chosen over Srikar Bharat, the second keeper in the XI.

“Really important (first hour). The ball is 55 (57) overs old, I don’t know how the ball is going to behave. There is a little bit of dew as well now. Let’s see how the ball behaves (reverse swing) couple of overs into the day then we can plan according to that. It generally won’t swing if there is dew, will go straight. We may get normal swing at times. I can’t go in with the mindset like if it doesn’t swing I don’t know what to do. It’s better to go in with an open mindset. If nothing is happening just bowl in one area and wait for things to happen. That’s what we generally do in India. If we can get one or two wickets we can pull back things” Ishant Sharma said at the start of the day’s play.