Rachin Ravindra was one of the main architects of a Kiwi draw in Kanpur. He scored an unbeaten 18 and along with Ajaz Patel kept India at bay denying them a much-deserved win in the first Test. Rachin ended unbeaten on 2 at the end of day 3 and was eventually dismissed on 18 at the start of day 4.

The Kiwis ended day 3 on 140/5 with Ravindra and Henry Nicholls showed incredible resistance. Following the end of the third day of play, the 22-year-old admitted that a lot of things had gone wrong for the visitors. However, he was confident that the players will learn from their mistakes and continue to fight.

“It’s always tough to bounce back after being bowled out for 60, a lot of things went wrong. We all strive to be better. We tried to put that sort of stuff behind us. It was not our best performance but we knew we have got a second innings and we’ll keep fighting from there.”

Rachin Ravindra Perished For 18 On Day 4

Nicholls (36*) & Ravindra (2*) will resume on Day 4 tomorrow, both showing plenty of character to close out Day 3 at Wankhede Stadium.

He further said that it is important not to dwell on being bowled out for 62 in the first innings but to come back into the game.

“It’s important for this game to learn from what you’ve done and move on to the next thing, not necessarily dwelling on what’s happened.”

Rachin also spoke about Ajaz Patel’s 10-wicket haul in the first innings. Patel picked up four in the second while Ravindra himself took three wickets that of Shubman Gill, Virat Kohli and Wriddhiman Saha. 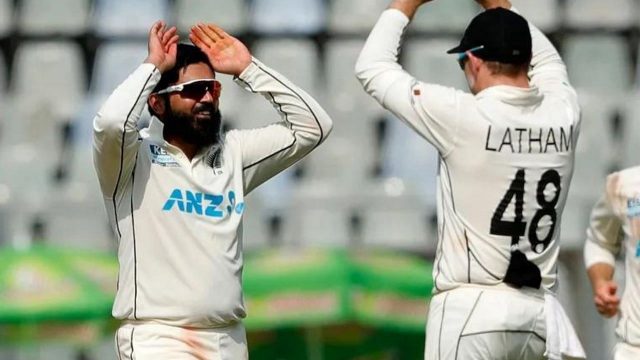 “I couldn’t be happier for Jazzy (Ajaz). He’s an incredible bloke and a great spinner. Each time we gave him the ball, we knew he was going to give us a result. Having him in the team is also helpful for me and the others in the team,” he concluded.