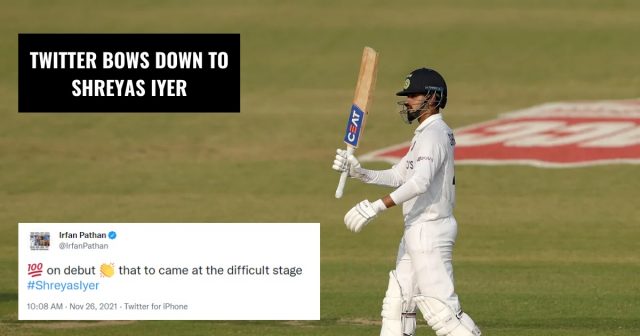 Shreyas Iyer became the 16th Indian batsman to score a century on Test debut. He replaced KL Rahul in the side and batted at number four in the line-up. He started day two on 75 and reached his hundred inside the first hour of the day’s play. In the process, he broke several records and created a few new ones.

Iyer added a 112-run stand with Ravindra Jadeja (50) for the fifth wicket on day 1. They could not add to their partnership as Jadeja was dismissed on his overnight score. Iyer started on the front foot on the second day and with wickets falling around him, he has kept a cool head and kept the scoreboard ticking for India.

Twitter, meanwhile reacted to Shreyas Iyer’s maiden Test ton as he carved out a brilliant innings. With the likes of KL Rahul. Rohit Sharma and skipper Virat Kohli missing from the line-up, Iyer took the onus of run-scoring once he was set.

Many congrats @ShreyasIyer15 big big moment. Well played. Waited for years. The injury made him more determined. Can be the start of many.

Brilliant start to his Test career by @ShreyasIyer15, combining intrepidity with responsibility to pull India out of a looming crisis into a position of strength. Well done!👏👏

A century on debut. First of many. Well played, Shreyas Iyer. #IndvNZ

The latest addition into the Centuries on debut for India club – @ShreyasIyer15 👌#TeamIndia #INDvNZ @Paytm pic.twitter.com/r9yl1kFjQa

What they have overcome speaks a volume about the determination and dedication! Congratulations #ShreyasIyer #inspiring #INDvNZ pic.twitter.com/Z7c7iIANiA

💯 on debut 👏 that to came at the difficult stage #ShreyasIyer

A magnificent innings under pressure from #ShreyasIyer . Showed great maturity, composure and class and becomes the 16th Indian to Score Century on Test Debut. Well Played @ShreyasIyer15 . Many more to come ! pic.twitter.com/UAu27wcWTH

Delighted for #ShreyasIyer. His talent was never in doubt since we first saw him at that 2014 U19 World Cup. This is proof now that he has the temperament to do it at this level. Keeps the game moving, isn't afraid to play the big shots. Good modern player.

While it was Kyle Jamieson who was the best Kiwi bowler on the first day, it is Tim Southee who has looked the best on the second day so far. He has taken both wickets so far in the first session.