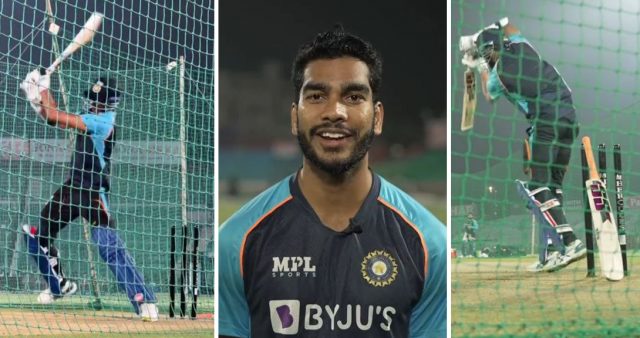 Team India’s latest entrant, Venkatesh Iyer is keen to learn whatever he can from former cricketer and Head coach Rahul Dravid. Venkatesh Iyer earned his maiden India call-up for the T20I series against New Zealand.

The left-hander performed remarkably well in the UAE leg of the Indian Premier League 2021. He scored 370 runs in 10 matches, at an average of 41.11, including four half-centuries. Venkatesh Iyer is likely to make his debut in the T20I series against New Zealand.

In a video shared by the Board of Control for Cricket in India, Venkatesh Iyer spoke about playing under Rahul Dravid. The all-rounder asserted that he is coming into the series with a blank mind, and wants to learn as much as possible. Iyer said,

“I just want to learn whatever I can. Rahul (Dravid) Sir, being the legend that he is, he has lots to share. It’s just about how we will go and pick things depending on what’s asked of us or what the situation is. I have come with a blank mind and whatever happens, I will take it in that manner.”

Of bond with buddy @Avesh_6 👌
Warm welcome from @ImRo45, Rahul Dravid & @RishabhPant17 👏
Special request for WWE's The Undertaker 😎 @ivenkyiyer2512 discusses it all with @28anand in this special feature. 👍 #TeamIndia #INDvNZ

Venkatesh also revealed that he interacted with the skipper Rohit Sharma and wicket-keeper batter Rishabh Pant. He described that they boosted his confidence and were very welcoming. Iyer further expressed that it was special to speak with “one of the best batters in the world” Rohit Sharma.

“I spoke with the captain and coach and I had a word with Rishabh as well. They were very welcoming and gave me a lot of confidence and gave a little pep talk on how to go about things. It feels good when established players who are doing good for the country (talk to you). Especially Rohit Sharma, being one of the best batters in the world, if he shares something with me, it is very special. It feels good talking to them,” said Venkatesh Iyer.