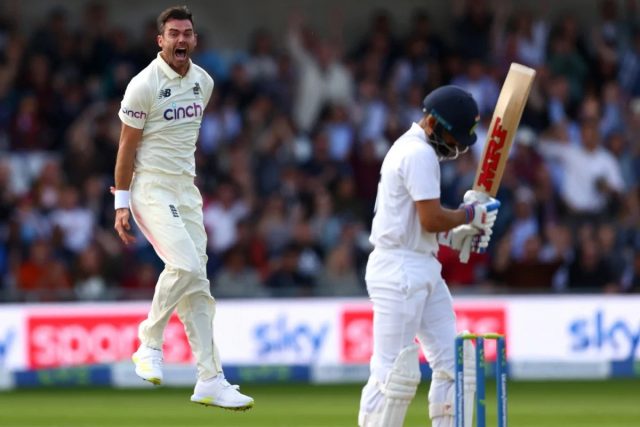 India’s horror show with the bat was witnessed by cricket fans all over the world in the third Test against England at Headingley, Leeds. Virat Kohli won his first toss in England in Test matches and he elected to bat first. The decision turned out to be a poor one for the Indian team as they lost back-to-back wickets very quickly. James Anderson ran through the Indian batting unit as he dismissed KL Rahul on duck, also Anderson picked the wicket of Pujara and Kohli before the 12th over of the innings.

The highest contributor for India with the bat was opener Rohit Sharma who scored 19 runs before getting out against Overton. The second-highest run-scorer for the team was Ajinkya Rahane with 18 runs. Meanwhile, the third-highest run contributor was not a player. As 16 runs came from extras.

Notably, India was bowled out at the score of 78 which is India’s 9th lowest total in a Test inning. Also, this was the Indian team’s third-lowest total after electing to bat first in Tests.

In this article, we have a look at 5 Lowest scores posted by the Indian Team against England in the Test

India’s 5th lowest score in a Test inning against England came back in 1977 when legendary Indian cricketers like Sunil Gavaskar, Dilip Vengsarkar, Mohinder Amarnath, Gundappa Viswanath, etc used to play for India. In the second inning of the match and India’s first inning. India posted 164 runs on the board with Sunil Gavaskar being the highest run-scorer with 39 runs.

Meanwhile, in the last inning of the match and India’s second inning. They only manage to score 83 runs, once again Sunil Gavaskar was the Highest run-scorer with 24 runs under his belt. Meanwhile, India lost that Test match by a huge margin of 200 runs against England.

This match saw an unarguably worst performance by team India in both Test innings combined. England won the toss and they decided to bat first. Also, England posted a very good score of 347/9 on the board and they declared the innings. In India’s first innings they posted their second-lowest total in Test history against England and overall 3rd lowest Test score of all time, we will talk about this further in the article.

Meanwhile, in the second innings, India scored only 82 runs against England. Notably, Hemu Adhikari was India’s highest run-getter with 27 runs under his belt during the 2nd / follow-on innings. Overall England won the match by an innings and 207 runs.

A sight to forget for India pic.twitter.com/ZPPbpvMxZn

Virat Kohli-led India was entering the Headingley, Leeds Test with a lot of confidence. As India defeated England by the huge margin of 151 runs in the previous Test match at Lord’s. Also, Virat Kohli won the toss in the Leeds, Test, and elected to bat just to put a horror show with the bat. No batsman from India was able to touch 20 runs and Rohit Sharma scored the highest 19 runs for the team.

Overall it was a big batting failure of a strong Indian batting unit. As they managed to score only 78 runs. Also, this was the first time every Indian batter failed to touch 20 runs mark while batting first in a Test inning.

Coming back to India’s worst Test batting outing which came back in 1952 under the leadership of Vijay Hazare. As we previously discussed India managed to put 82 runs while batting in the second innings of the match. Meanwhile, the first inning was even worst for India as they scored only 58 runs.

Only one batsman which was Vijay Manjrekar was able to cross 20 runs mark as he scored 22 runs. Notably, In the end, India lost the match by 207 runs and an innings against England. Also, England dominated that series against India.

42 runs in an innings remained India’s lowest Test score in an inning for a very long time, before India batted extremely poorly and put 36 runs on the board against Australia during Border Gavaskar Trophy. Coming back to 42, this remains India’s lowest score against England in a Test inning. After winning the toss and batting first England smashed 629 runs. Meanwhile, in response, the Ajit Wadekar led side put 302 runs on the board and they were called for a follow-on.

During the follow on India did a terrible job and they had a bizarre outing as they scored only 42 runs and no batsman was able to touch 20 runs mark. The highest run-scorer for the team was Eknath Solkar who scored only 18 runs. Eventually, India lost that match against England by an innings and 285 runs, Also England dominated that series against India.