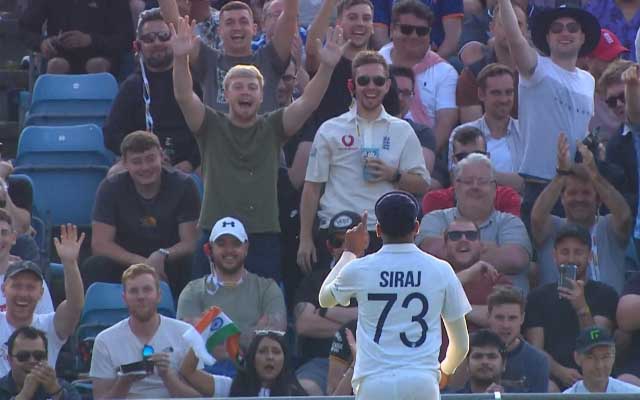 India did not have a good first day in Headingley with England dominating the entire day’s play. At stumps, their openers took the team to 120/0 with both batsmen getting to their half-centuries. This was after England had bowled India out for 78 in their first innings. Meanwhile, Indian pacer Mohammed Siraj had a moment with the crowd at the fag end of the day, which became one of the talking points of the day’s play.

Mohammed Siraj was seen signaling the crowd who were trying to bully him. He said to the crowd that it was India who were leading the series and that the home team was trailing. Indian skipper Virat Kohli saw the interaction unfold from the slip cordon and did not enjoy it any bit. He was seen shaking his head at the behaviour of the England crowd. The Hyderabad pacer bowled a spell of 7 overs giving away 26 runs.

These english fans have no idea who they’re messing with.

Meanwhile, England finished the day on the driver’s seat. They have secured a lead of 42 runs after bowling India out for 78. James Anderson dismissed the Indian top-order after which the middle order was taken care of by the other seamers. Anderson and Craig Overton took three wickets each as Ollie Robinson and Sam Curran took two each.

A sight to forget for India pic.twitter.com/ZPPbpvMxZn

India won the toss for the first time in this series. However, this was not what they expected after opting to bat first. The England pacers extracted the conditions meticulously and rocked India early in the Test match. All the high and the lift of the Indian team after their famous Lord’s win was brought to rock bottom by the opposition. India had three batsmen getting out for a duck as Jos Buttler took five catches behind the stumps.