The Team India selection committee announced India’s squad for the T20s against England wherein Suryakumar Yadav, Ishan Kishan and Rahul Tewatia received maiden call ups. Though Suryakumar Yadav has been selected for the England T20s, he has been knocking on the doors of the Indian Team ever since the ever successful season for the Mumbai Indians during IPL 2020.

Finally, the time came for Suryakumar Yadav as he was picked for the T20 series against England. Post his selection, a comment made by current Team India selector Abey Kuruvilla has now gone viral on social media. On 19th Nov 2019, Abey Kuruvilla had commented “Sky ka time ayega” on Suryakuma’s batting video posted by Ajit Gopalakrishnan. This comment has had everyone talking as the latter has finally found a place in the Indian T20 side. 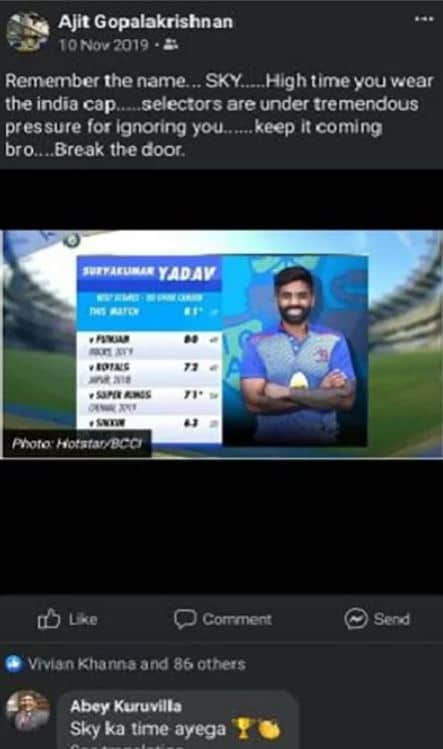 Prior to this, when Suryakumar Yadav had missed on the Australian Tour, the batsman expressed disappointment. Suryakumar described the day which followed through he missed out from selection. Even his skipper Rohit Sharma had asked him if the latter was disappointed to which he did accept that he was dejected.

“Frankly, I was expecting to be selected this time. I was a bit disappointed when I found my name missing. I couldn’t even train that day and it was difficult to take my mind off from that dejection. Even Rohit (Sharma) asked me if I was disappointed and I told him I was,” Suryakumar had told.

India squad for T20Is against England