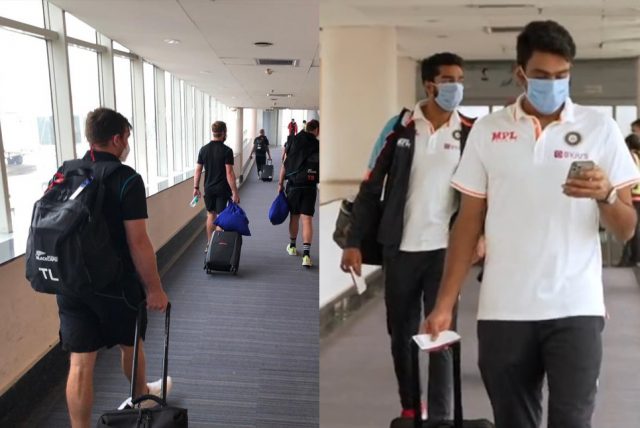 The Indian cricket team led by Rohit Sharma reached Ranchi on Thursday for the second T20I against New Zealand on November 19, Friday. India are leading the series courtesy of their win in Jaipur in the first game. A win at Ranchi will ensure India’s series win against the Kiwis.

BCCI’s official Twitter handle uploaded a video of Team India’s journey from Jaipur to Ranchi. The video shows the Indian team’s exit from the Jaipur airport to them landing at the Birsa Munda airport in Ranchi.

It was time for goodbye Jaipur & hello Ranchi 👋

Fans in Ranchi welcomed #TeamIndia with smiles on the eve of the 2nd @Paytm #INDvNZ T20I 🙂👍 pic.twitter.com/0I9hmBtXFX

Meanwhile, in an interesting incident, a PIL was launched by an advocate named Dheeraj Kumar to the Jharkhand High Court against allowing capacity crowd for the second game. The lawyer has opposed the permission to organize cricket matches with 100% capacity.

The advocate has also requested for an urgent hearing on the case so that a decision on the matter can be arrived early and the decision of the state government is considered as final.

Initially, the government had allowed tickets for 50 percent of the crowd capacity but the organisers have now opened booking for the capacity crowd inside the stadium. The preparations too are in full flow with just over 24 hours to go for the game.

So far five ODIs have been played at this venue. The average first innings score is 261 which drops down to 198 in the second innings. Two games have been won by the team batting first and twice chasing.

The side has also won 10 out of their last 11 T20I series at home. Apart from the five ODIs, Ranchi’s JSCA International Stadium Complex has also hosted two Tests and two T20Is.