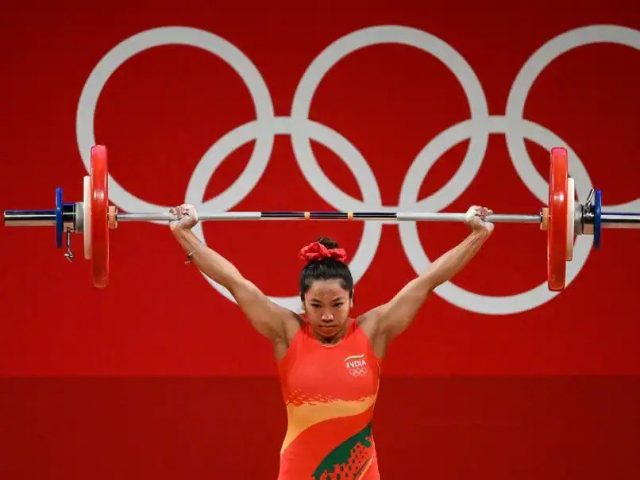 Imphal’s Mirabai Chanu won India’s first medal at the Tokyo Olympics after clinching silver in the women’s 49 kg event on Saturday in Tokyo. This is India’s first silver in weightlifting at the Olympics. Mirabai lifted a total of 202 kg and broke the previous Olympic record in the category.

India’s last medal in weightlifting was won by Karnam Malleswari, a bronze at the 2000 Sydney Olympics. Mirabai, a former world champion, has now won medals at Asian Games, Commonwealth Games, World Championships, and the Olympics.

Mirabai Chanu entered the competition at 84 kg in the snatch category and her first lift was successful. She then had another successful lift at 87 kg before failing in her third and final lift at 89 kg. In her preferred clean & jerk category, Mirabai’s first two lifts at 110 kg and 115 kg were successful.

Having failed at each of her three lifts in the snatch at the Rio Olympics, Mirabai equaled her personal best in the snatch category this time around.

But Mirabai Chanu, who landed in Tokyo as one of India’s top medal contenders, stood tall on the expectations. The social media buzz was on an all-time high after Mirabai gave India their first medal in the Tokyo Olympics 2020. People from all corners of India congratulated Mirabai on their auspicious landmark including Indian cricketers.

Here is how the cricket fraternity congratulated Mirabai Chanu:

Off the mark at #TokyoOlympics2021 congratulations #MirabaiChanu claiming silver in #Weightlifting an inspiration for the nation already, just the beginning, many more to come 🙌🏼💪🏼 go #TeamIndia

On #gurupoornima
What a gurudakshina by #MirabaiChanu
Only the second Indian woman to win an Olympic silver. Congratulations and so proud of you.#Cheers4India pic.twitter.com/gqvLQj4a6b

Congratulations #MirabaiChanu on bringing home the Silver medal. Proud of you! 🙌🏾 #Tokyo2020@mirabai_chanu @Olympics

The first one is here!
Congratulations @mirabai_chanu for winning a silver medal 🥈 in weightlifting for India.
Proud moment!#Tokyo2020 pic.twitter.com/MhSeAtnvDS

Congratulations #MirabaiChanu on making us proud and bringing us glory.
Our first medal at the #TokyoOlympics2020 , a 🥈 in the Women's 49kg weightlifting . Super Proud pic.twitter.com/8Un7GvxZjU