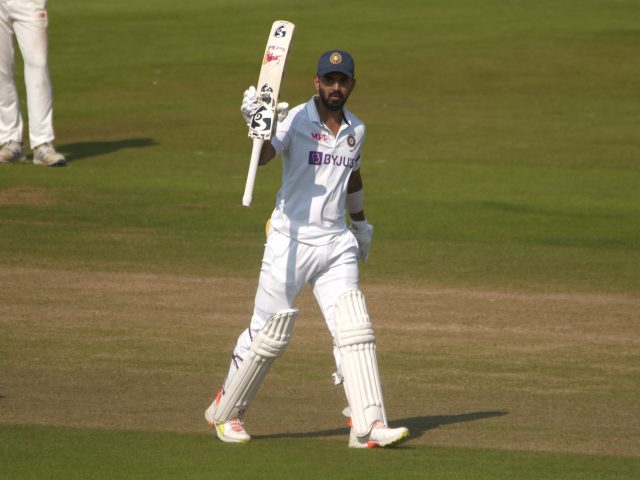 Team India batsman KL Rahul smacked a brilliant century in the warm-up game against Durham’s select County Championship XI to push his case for the upcoming five-match Test series against England, which starts on August 4 in Nottingham.

Rohit Sharma, who led the side in the absence of Virat Kohli, opted to bat first after winning the toss. Durham made a good start sending Rohit and Mayank Agarwal back in the hut quickly.

Struggling at 41/2, India needed a big partnership but Cheteshwar Pujara’s poor run with the bat continued. He gave away once again after getting a start to put the visitors in deep trouble. But KL Rahul and Hanuma Vihari managed to arrest a collapse and steady the ship.

Just when things looked like turning in favour of India, Vihari got out after getting another start. Since then, it was all Rahul, who came into the side after Rishabh Pant came COVID positive and didn’t travel with the squad in Durham.

The Karnataka batsman stitched a much-needed partnership with Ravindra Jadeja to bail the side out of danger. By the time KL Rahul went back retired hut, he has scored a century. Rahul dominated the opposition bowlers to cruise through to the three-figure mark.

It was Rahul’s first first-class game in 16 months, and he has cashed in on the opportunity. Microblogging site Twitter was on fire soon after KL Rahul reached the landmark.

Here are some reactions:

Century for KL Rahul, what an extraordinary innings this has been. He has returned to the red ball side with so much improvement, marvellous knock. pic.twitter.com/oLHTcVhVi7

Hundred for KL Rahul, 100* from 140 balls including 11 fours and 1 sixes in the practice match against County Select X1 – KL is back with bang in Test cricket. pic.twitter.com/YvahK1zxEi

Hundred for KL Rahul v County Select XI at Durham. The management sees him as a middle order option. Should he play the 1st Test with runs under his belt?

KL Rahul, playing a First Class match after almost 2 years, gets a fine 100.

This century is marked by fine composure, usual elegant shots, ultra soft hands. It looks like he never had a poor form in tests and was never dropped. Vintage Stuff!

Hope he carries this confidence! pic.twitter.com/dx7IdOIEMI

India were well-placed at 234 for five, before KL Rahul was retired hurt. All-rounder Ravindra Jadeja also auditioned well with a half-century. He along with Shardul Thakur will look to add a big partnership and post a daunting total in the first innings.