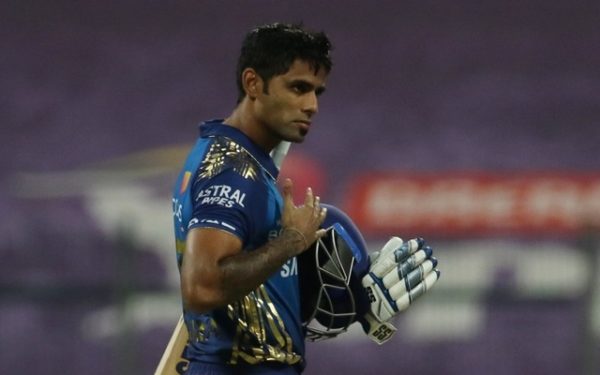 All eyes were glued on Suryakumar Yadav when he came out to bat against Royal Challengers Bangalore in IPL 2020. The Mumbai Indians batsman has looked the part this season each time when he has batted. However still, the Indian selectors chose not to include him for the T20 series against Australia.

Several experts and former cricketers were shocked not to see his name after his heroics in the IPL. The right-handed batsman against RCB looked fixed to prove a point and let his bat do the talking. In a tense run chase even skipper of RCB, Virat Kohli was seen sledging him and tried to make his life difficult at the crease.

Also Read: Deep Inside Suryakumar Yadav Disappointed To Not Have Donned The Blue Of India- Kieron Pollard

There was constant chatter from Kohli as soon as Yadav Surya came out to bat. It got louder from Kohli when he was the MI batsman in sublime touch and was making batting look easy on a tricky track. However, Surya walked away and decided to stay quiet and continued to focus on his batting.

The 30-year-old paced his batting to perfection and scored a victorious 79 runs from just 43 runs. His decisive knock included 10 boundaries and 3 sixes. On the day the RCB bowling attack just had to answers and seemed clueless against Suryakumar Yadav. Eventually, the defending champions chase down the target with 5 balls to spare.

The elegant batsman once again made a statement and silenced his critics in style. Fittingly Surya hit the winning runs but it was his gesture after the stroke that won the hearts of many.

After taking his side home a clam and collective Surya was seen looking at the dressing room and pointing at himself and telling everyone that he had the match under control. Eventually, there was no aggressiveness and swearing of words from him as he looked satisfied after taking his home past the finishing line.

That's that from Match 48 as @mipaltan win by 5 wickets.@surya_14kumar with an unbeaten 79.

Also Read: Suryakumar Yadav Reacts After Being Left Out Of India’s Squad For Australia Tour