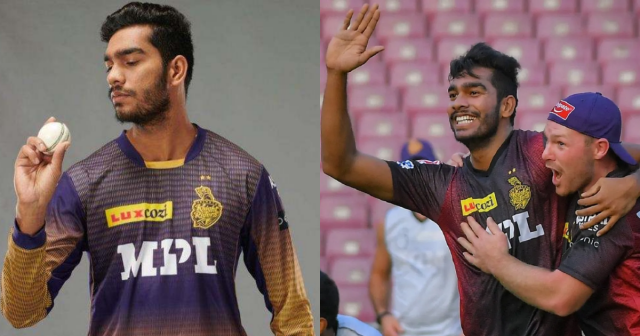 Kolkata Knight Riders have included a fresh face in their playing XI for their first match of the second phase of Indian Premier League (IPL) 2021. The Eoin Morgan-led side has given a chance to Madhya Pradesh all-rounder Venkatesh Iyer to debut at the Sheikh Zayed Stadium in Abu Dhabi.

26-year old Venkatesh is an ambidextrous all-rounder. He bats left-handed but bowls with his right hand.

In this article, we will take a look at three facts about KKR’s latest debutant Venkatesh Iyer:

Venkatesh Iyer played at the U-16 level for his state team before receiving a place in the Madhya Pradesh senior team. Born in Indore, Venkatesh made his T20 debut for Madhya Pradesh against the Railways cricket team at Holkar Stadium in March 2015. He received his maiden List-A cap against Saurashtra at Rajkot in December 2015. In that match, he got a chance to bat at the crucial no.3 spot but managed to score only 16 runs.

Iyer made his first-class debut against Hyderabad on December 6, 2018. If we talk about his batting statistics in first-class cricket, the youngster has played 15 innings and scored 545 runs at a decent average of 36.33. In List A Cricket, he has a staggering average of 47.16 and has scored 849 runs at almost run-a-ball.

In the IPL 2021 auctions, Kolkata Knight Riders bought Venkatesh at his base price of 20 Lakhs. Venkatesh was handed his maiden cap for the franchise ahead of the first match of KKR during the UAE leg of IPL 2021. He’s got a golden opportunity to prove his mettle and would be eager to perform on the field.

Venkatesh caught the attention of fans during the Vijay Hazare Trophy in 2020-21. Playing against Punjab, the southpaw from Indore played a blistering knock of 198 runs in just 146 balls. Later, he registered figures of 2/24 with the ball as well. Hence his IPL franchise-KKR will be aware of the fact that he possesses the ability to change the game single-handedly.