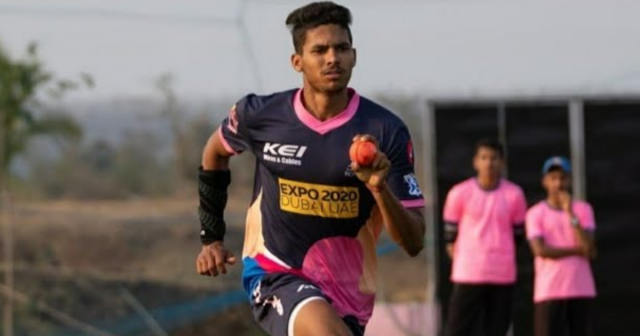 Rajasthan Royals have included a fresh face in their playing XI for Match 47 of Indian Premier League (IPL) 2021, against Chennai Super Kings. The Sanju Samson-led side has given a chance to the talented left-arm pacer Akash Singh a debut cap at the Sheikh Zayed Stadium in Abu Dhabi.

19-year old Akash is known for changing games with his wicket-taking prowess. The young man, a resident of Bharatpur, Rajasthan, would be excited to represent his home state in the Indian Premier League.

In this article, we will take a look at three facts about RR’s latest debutant Akash Singh:

Akash made his T20 debut for Rajasthan against Tamil Nadu in 2019. In his four overs, he produced a brilliant spell of 2/26. He dismissed star players like Dinesh Karthik and Murali Vijay in that match.

However, before making his Twenty20 debut, he featured in the 2019 ACC Under-19 Asia Cup for India’s under-19 cricket squad in September 2019. The Vijay Hazare Trophy in 2021 saw Akash Singh making his List-A debut. The left-arm pacer appeared in three games and took two wickets at a strike rate of 7.52.

In the 2020 U19 World Cup, he was a key member of India’s strong bowling attack. With a three-wicket haul against Australia, Akash established a name for himself. The youngster picked 7 wickets during the tournament.

Akash was purchased by the Rajasthan Royals for INR 20 lakhs in the 2020 IPL auction ahead of the 2020 Indian Premier League. However, he couldn’t get a chance in playing XI during that season and was released by the team.

But he was re-purchased by the same franchise, in the IPL auction in February 2021. The Royals have showed a strong interest in left-arm fast bowlers (Mustafizur Rahman, Jaydev Unadkat, Chetan Sakariya) in recent years, so it’s not surprising that they bid twice for Akash Singh.