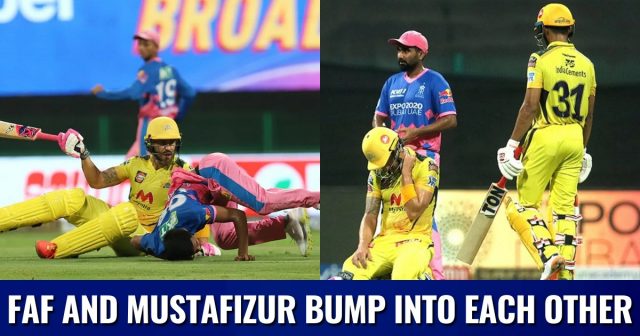 Rajasthan Royals (RR) are playing a crucial game against Chennai Super Kings (CSK) in Abu Dhabi on Sunday. The side in pink needs to win the game to give themselves the best chance of making the playoffs. CSK with 18 points have already qualified for the playoffs along with Delhi Capitals. Meanwhile, Fa Du Plessis, scoring over 400 runs as an opener had a bad collision with Royals pacer Mustafizur Rahman inside the powerplay. Thankfully there was no damage to both the players who picked themselves up after a brief medical attention.

The incident happened in the last over of the powerplay. Walking down the wicket, Du Plessis tried to take a quick single and barged into the Fizz in his attempt to complete the single. There was a brief halt in play as both the players required medical attention.

Meanwhile, CSK lost two quick wickets after the collision. Tewatia fooled Faf as he stepped down the wicket and was stumped easily by Royals skipper Sanju Samson. In his very next over, Tewatia got Suresh Raina caught at deep mid-wicket. Raina is not having an IPL season to remember and added another failure to his string of low scores.

Sanju Samson won the toss and opted to bowl first in Abu Dhabi. Chasing has been tough at this venue but the Royals have chosen to go that way.

“The past matches and the experience we have, it’s easier to chase. It has always been the same from the past two-three years. You need to show the character, commitment towards the franchise. I would like everyone to put in some great performances. We have made four changes” said Samson after winning the toss.

” We would have liked to bowl first, because the wicket here will stay the same. . Sam comes in for Bravo and Asif comes in for Deepak. We are playing back-to-back games, so it’s important to keep the players fresh. It’s better to rest them. The weather will keep getting better from now, and it will be the perfect weather during the World Cup” said Dhoni.