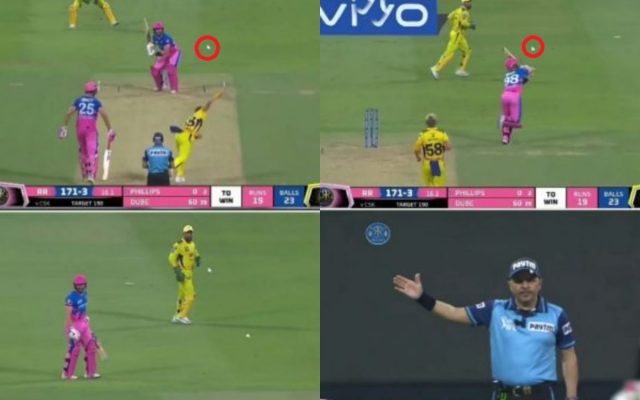 A hilarious incident occurred during the 47th match between Rajasthan Royals’ (RR) and the Chennai Super Kings (CSK) on Saturday in Abu Dhabi involving Sam Curran and Glenn Phillips. The incident left the fans in surprise.

Yashasvi Jaiswal and Shivam Dube steal Gaikwad’s thunder as Royals stun Chennai Super King’s in a run-fest. It is one of the best power-play batting we have witnessed throughout the IPL 2021 season.

Chennai Super King’s (CSK) winning streak in the UAE leg of the IPL 2021 came to an end in their last encounter against the Rajasthan Royals (RR) in Abu Dhabi on Saturday, 2nd October. The Royals got the better of them in Abu Dhabi and kept their playoff hopes alive. Youngsters Yashasvi Jaiswal and Shivam Dube took charge in their own hands to finish the job with 16 balls to spare.

Opening duo Jaiswal and Lewis didn’t even have to dust their drives as CSK bowlers kept bowling short and they kept dispatching it into the night sky of the desert. With the Royals been 81/2 in the 6th over, Dube walked out in the middle to have some jolly time with the bat.

The first ball he faces Jadeja starts with an overpitches delivery and he smashed it into the log-on stands. Moeen Ail soon got the same treatment, the six seemed to be stuck in the dark night before thudded into the ground behind the long-on boundary.

The English All-rounder didn’t have the greatest of outings. The left-arm pacer conceded 55 runs in his quota of 4 with his economy rate being 13.8. He was unfortunate as he couldn’t clasp any wickets either.

With almost all his delivery were dispatched over the ropes, one of the bowls had the internet left in total shock. It was the second ball of the 17th over, RR were balls away from tasting victory. Curran then hogged the limelight with an outrageous delivery. Apparently, the ball slipped from his hand and went up. What was even more hilarious is that Glenn Phillips, who was facing the delivery, ran out his crease in order to utilize the ball.

Phillips stopped later when he realized the ball is out of his reach. Although this incident didn’t affect the game, it surely affected the internet it left the netizens in splits. The video got viral in no time and Curran and Phillips’ antics became the talk of the town. Meanwhile, the ball was adjudged dead by the umpire and the game resumed.

However, this Sanju Samson- lead Rajasthan Royals (RR) have kept their hopes alive for qualifying for the IPL 2021 playoffs after a fantastic victory over 3-time champions Chennai Super Kings (CSK). The Royals will have to win their remaining fixtures and are also dependent on the other match results. While CSK is already qualified for the playoffs.