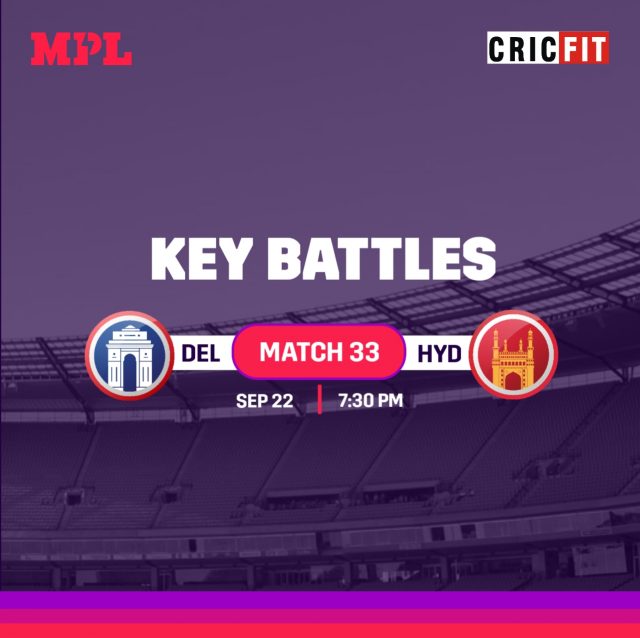 After a thrilling finish yesterday, Wednesday’s encounter will see second-placed Delhi Capitals (DC) lock horns with Sunrisers Hyderabad (SRH) at the Dubai International Cricket Stadium. Kane Williamson’s SRH are currently placed eighth in the points table and will be desperate to bounce back.

DC would hope to start from where they left in the first half of IPL 2021. Shikhar Dhawan and Prithvi Shaw, who scored 512 partnership runs as openers, will lead the charge once again with the bat. Both of them, who missed out on India’s T20 World Cup squad, would like to answer back with truckloads of runs.

SRH, on the other hand, Hyderabad desperately need to bounce back if they keep themselves afloat in the competition. David Warner is likely to get an opportunity to redeem himself after a below-par performance in the India leg of IPL 2021.

On that note, let’s take a look at 3 key battles from the SRH vs DC tie in Dubai for MPL fantasy cricket:

Veteran DC spinner Ravichandran Ashwin is one of the potent spinners in the world and is more effective against left-handers. His duel with David Warner in the top-order is likely to decide the outcome of the DC vs SRH clash.

So far, Ashwin and Warner have locked horns against each other on 11 occasions where the Aussie has managed to amass 95 runs at a strike rate of 111 while the Ravichandran Ashwin got the better of David Warner thrice.

Both players will have their individual points to prove going into this game.

Prithvi Shaw was in scintillating form in the first half of IPL 2021, where he scored 308 runs from eight matches, including three fifties. Hyderabad will have to stop Prithvi if they want to keep DC within a small total and who better than Bhuvneshwar Kumar to stop the swashbuckling opener.

With the ball swinging both ways, the veteran India pacer can pose a serious threat to Prithvi Shaw. Overall, they have faced each other six times, with Bhuvneshwar get the young opener out twice.

On the other hand, Prithvi, who missed out on a T20 World Cup spot, will look to use the platform and prove his potential.

The Key Battles to keep in mind ahead of today's match between Delhi and Hyderabad #MPLfantasy #Cricfit @MplFantasy pic.twitter.com/1uJ7tNbwZq

Shreyas Iyer, who returns to action after a long injury lay-off, will strengthen the Delhi Capitals middle-order. SRH will depend on Sandeep Sharma to keep the DC cricketer silent.

Iyer has managed only 34 runs from eight meetings while Sandeep Sharma has got his counterpart out on three occasions. Both players will be keen to get the better of one another when SRH go up against DC later tonight.