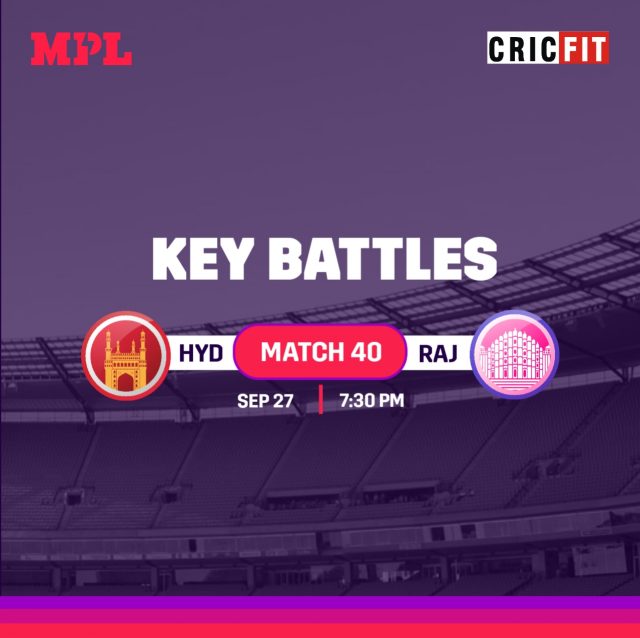 Sunrisers Hyderabad (SRH) will take on Rajasthan Royals (RR) in match 40 of IPL 2021 at the Dubai International Cricket Stadium on September 27. While Hyderabad have bowed out of the competition, Rajasthan will be desperate to secure two points to keep themselves floating in the race for a top-four finish.

RR haven’t had a wholesome performance so far with captain Sanju Samson leading the batting unit single-handedly. However, they’ll be thrilled with the way the pace trio of Mustafizur Rahman, Chetan Sakariya, and Kartik Tyagi have performed.

SRH have not looked in their mojo throughout the IPL 2021. They hoped that a change in captaincy from David Warner to Kane Williamson mid-season would change fortunes, however, it hasn’t worked. They will look to give more opportunities to the youngsters as they look ahead in the future.

On that note, let’s take a look at 3 key battles from the SRH vs RR tie in Dubai for MPL fantasy cricket:

RR captain Sanju Samson has been the lone run-scorer for his side while others have struggled to get going. While RR will heavily depend on their skipper to do the bulk of the scoring, SRH will rely on Bhuvneshwar Kumar to get Sanju out early.

So far both of them have gone up against each other on 13 occasions. Bhuvneshwar Kumar has managed to dismiss Sanju Samson only twice while the RR captain has accumulated 96 runs against him.

It will be interesting to see who gets the better in Dubai tonight.

SRH skipper Kane Williamson has not looked in the best of form in the second phase of IPL 2021. As Hyderabad look to bounce back from the back of defeats, Williamson will have to do the bulk of the scoring.

On the other hand, Chris Morris will be deployed with the task of stopping the SRH captain. The Proteas all-rounder has dismissed Williamson twice in four meetings and will be pumped up to increase the tally.

South Africa’s Chris Morris has been Rajasthan Royals’ highest wicket-taker for IPL 2021 with 14 scalps. He will have the role to stop Manish Pandey, who holds SRH’s middle-order.

The Proteas cricketer is yet to get the better of Pandey in six meetings and this will be a good opportunity for Morris to redeem himself.

This duel will most likely decide the outcome of the encounter.