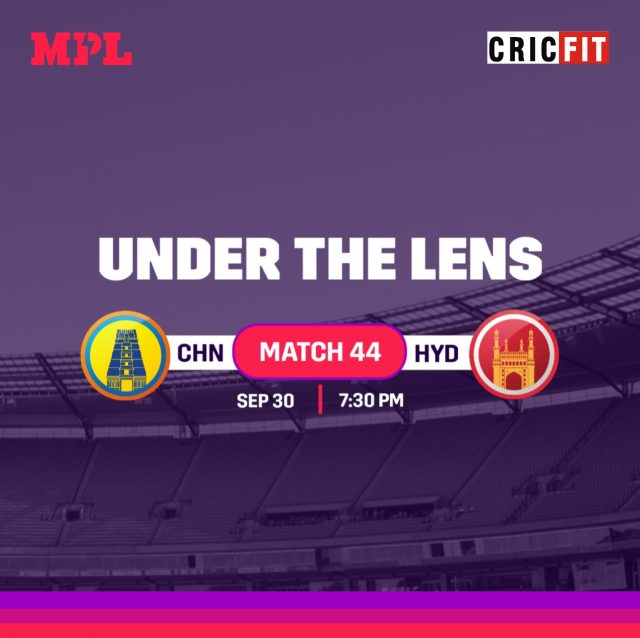 Table-toppers Chennai Super Kings (CSK) will lock horns with bottom-placed Sunrisers Hyderabad (SRH) in match 44 of IPL 2021 at the Sharjah Cricket Stadium. While CSK will look to consolidate their position at the top, Hyderabad will look to continue the winning momentum.

SRH’s move to bench some of the senior players in favour of the youth did pay off against Rajasthan Royals as SRH managed to end their losing streak that stretched to five games. Jason Holder’s addition has been a huge boost since last year and Jason Roy had a memorable debut for the franchise as he managed to fill in the shoes of David Warner.

On the other hand, CSK have won all three games in the second phase of IPL 2021 and will be oozing with confidence. MS Dhoni & Co will look to continue the same run in the competition.

On that note, let’s take a look at 3 players who will be under the spotlight during CSK vs SRH during the MPL Fantasy Cricket:

SRH skipper is the heart of the Hyderabad side and leads them from the front. Williamson played a match-winning knock as Hyderabad returned to winning ways after five matches.

The franchise will once again want their star player to deliver the goods against table-topper CSK. Williamson also has a good record against MS Dhoni’s Chennai scoring 327 runs from nine matches including three fifties.

Faf du Plessis has been a pivotal part of CSK ever since he joined the franchise. His consistency at the top order gives MS Dhoni & Co the breather to go after the bowling in the middle and death overs.

The former Proteas captain will look to live up to reputation when CSK lock horns with SRH on Thursday. Faf du Plessis has so far scored 294 runs in 12 meetings against the Orange Army at a  strike rate of 135.5.

The three-time champions will want a similar kind of start in Sharjah today.

Rashid Khan is arguably the best spinner in the shortest format of the game at present. SRH’s consistent run in the IPL is largely due to Rashid’s brilliant run in the tournament.

The Afghanistan spinner has enjoyed good success against CSK picking up nine wickets from the same number of matches at an economy rate of 6.9.

SRH will want Rashid Khan to deliver the goods once again against an in-form CSK side.