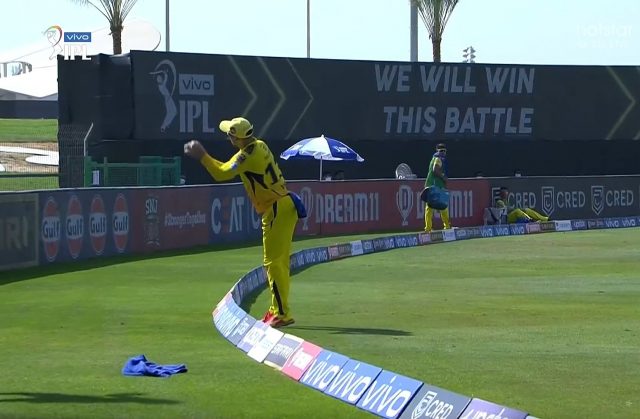 Chennai Super Kings (CSK) cricketer Faf du Plessis grabbed an outstanding catch in the boundary to get the better of Kolkata Knight Riders (KKR) captain Eoin Morgan. The Knight Riders are currently at 78/3 at the end of 10 overs in Sunday’s encounter in Sharjah.

Faf du Plessis has a happy knack of taking stunning catches and it was another routine affair for him. Eoin Morgan came down the target and whacked a short-pitched delivery off Josh Hazlewood. Faf du Plessis took the catch at long-on, and just when he was about to overhaul the boundary, he lobs the ball up, comes back in, and pouches it on the second attempt to give Chennai an important breakthrough.

Kolkata will now have to bat out of their skins to post a challenging total on the scoreboard.

Earlier in the day, Kolkata had a poor start after captain Eoin Morgan won the toss and opted to bat first. Shubman Gill was run out after a miscommunication with opener Venkatesh Iyer.  Ambati Rayudu hit the bullseye to caught Gill short of his crease.

Venkatesh Iyer also got a chance after Faf du Plessis was an inch short to take another stunner. The southpaw, who has been in brilliant touch, shared a crucial stand with Rahul Tripathi before edging one off Shardul Thakur.

It's a good thing for Morgan that he was made the captain after DK and the team has won last 2 matches, or else the calls for him being dropped from XI would have been louder.

CSK made a swift comeback in the match thanks to Shardul Thakur and Ravindra Jadeja, who also got the better of well-set Rahul Tripathi.

With Andre Russell in the middle, Kolkata will expect him to fire as they aim to post a 170+ target against star-studded CSK batting.