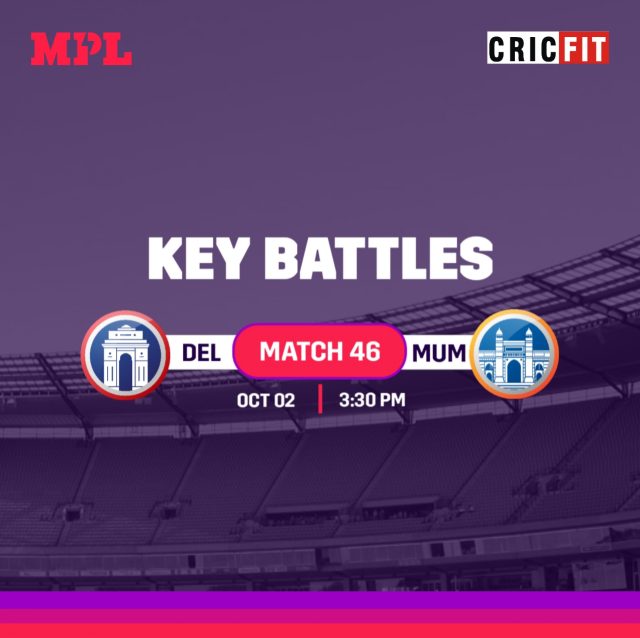 Mumbai Indians (MI) will take on the Delhi Capitals (DC) in Match 46 of the Indian Premier League 2021 at the Sharjah Cricket Stadium on Saturday, October 2.

The Rishabh Pant-led team is a strong contender to win the title this season. Despite, the loss in their previous match, they will be confident going against the Mumbai Indians on Saturday. Delhi Capitals will bank on their opener Shikhar Dhawan, who is their leading run-scorer so far. In the bowling department, Kagiso Rabada holds the key for the Capitals.

Meanwhile, the Mumbai Indians will be keen to consolidate their position on the points table. Hardik Pandya’s innings in the previous match will boost their confidence. However, Suryakumar Yadav’s form is still a concern for them. Head-to-head, Mumbai Indians have an edge and will be determined to get the better of the Delhi Capitals again.

On this note, let’s take a look at the 3 key battles from the MI vs DC clash in Sharjah for MPL fantasy cricket:

Mumbai Indians’ opener Quinton De Kock has had a decent outing so far in the second phase of the Indian Premier League 2021. He slammed a fifty against the Kolkata Knight Riders in Abu Dhabi. However, expect that knock, Quinton De Kock hasn’t been able to convert his starts.

While the statistics are tilted toward Ravichandran Ashwin, it will be interesting to see Quinton De Kock’s approach.

Delhi Capitals’ skipper Rishabh Pant is considered one of the most dangerous batters in world cricket. He can turn the match in his favor, with his explosive batting skills. However, the wicket-keeper finds it difficult against Jasprit Bumrah.

Rishabh Pant has been dismissed by the pacer 6 times in 11 innings and has a strike rate of only 100 against him. As Jasprit Bumrah is the spearhead of the Mumbai Indians’ bowling attack, his numbers against the Delhi Capitals skipper, make it an exciting contest.

Kieron Pollard is a vital cog in MI’s wheel, as he has the prowess to take on any opposition in the world on any ground. He has a great record against the DC premier off-spinner Ravichandran Ashwin.

Kieron Pollard has a strike rate of 160 while facing Ashwin in the Indian Premier League. He has slammed 72 runs in 12 innings but has also got out 5 times to the off-spinner. It will be interesting to see, who emerges as the winner in the clash on Saturday.