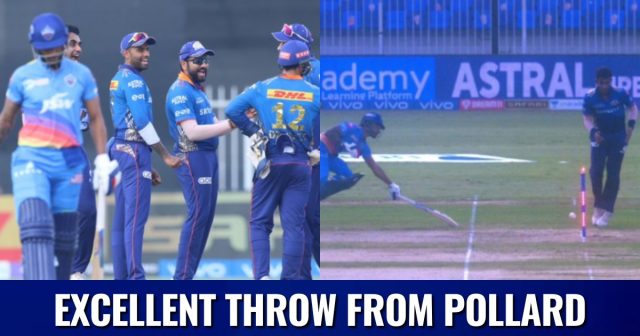 Mumbai Indians are playing a must-win game against Delhi Capitals in Sharjah in the first of the two games on Saturday, Chasing a target of 130, Shikhar Dhawan was the first Capitals wicket to fall via a run-out. A good bowling performance from the Capitals bowlers restricted the Mumbai Indians to 129/8.

Meanwhile, in the second over of the Delhi Capitals chase, Shikhar Dhawan trying to steal a quick single was run out after a direct-hit from Kieron Pollard. Coming down the wicket, Dhawan hit the ball to the long-on. Pollard pounced on the opportunity and hit the stumps on the full to give the Capitals an early blow.

A fine effort in the field from @KieronPollard55 as his direct hit catches Shikhar Dhawan short of his crease. 👍 👍

Along with CSK, Delhi Capitals have also qualified for the playoffs. DC and CSK are the top two teams currently topping the points table at the moment. The match was set up by the Delhi bowlers.

Avesh Khan and Axar Patel took three wickets apiece to limit the Mumbai batsman. Anrich Nortje took the big wicket of Pollard in the middle-overs to limit the damage.

Avesh is currently second on the list of top-wicket taker with 21 wickets to his name.

Rohit Sharma spoke about Mumbai’sneed to win the game at the toss. The side is currently placed fifth on the points table with 10 points in their kitty.

“Teams have lost batting first and chasing, so it doesn’t matter, we have to play good cricket and put runs on the board. Our bowling is amazing and has restricted oppositions so we just have to bat well and get a par score. We know where we stand on the table but we have to focus on what we have in hand, and on the particular occasion. We have a good squad and have to perform collectively” said Rohit.