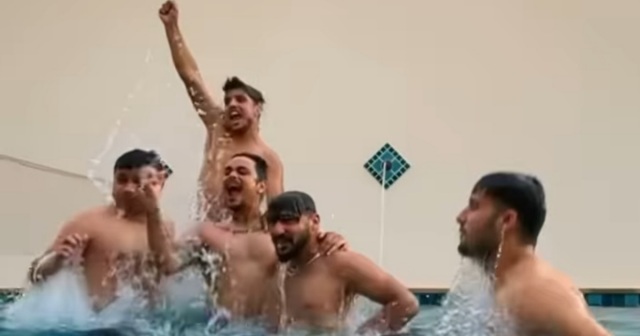 Most of the Members of the Champion franchise Mumbai Indians arrived in Abu Dhabi on August 13 for the second phase of Indian Premier League (IPL) 2021. Meanwhile, the squad was seen celebrating after finishing the mandatory quarantine period of one week. Notably, the Mumbai Indians boys were seen enjoying the game of pool volleyball.

The five times IPL champions shared a video on their official Instagram handle. In the video, all the players and other Mumbai Indians members were seen enjoying their time. Big names like Ishan Kishan, Piyush Chawla, Aditya Tare, and Dhawal Kulkarni were also spotted playing pool volleyball. Notably, some of the star players have not yet traveled to UAE. The skipper of MI Rohit Sharma, Star Mumbai Indians pacer Jasprit Bumrah, and Man in red hot form Suryakumar Yadav didn’t travel to UAE. Currently, all three players are part of the India tour of England 5-match Test series. Meanwhile, Mumbai Indians captioned the video:

“Diving straight out of quarantine for a game of Pool Volleyball,”.

How Did Mumbai Indians Perform In First Phase Of IPL 2021

As always Rohit Sharma-led team started the season with a loss against Virat Kohli-led Royal Challengers Bangalore. However, after that, they made a good comeback. Mumbai Indians played a total of seven games and remained victorious in four of them losing the other three. They were placed on the no.4 spot when the season was suspended due to the Covid-19 spread. Notably, the last match they played was against Chennai Super Kings. That match was a nail-biting encounter between the teams. Meanwhile, At the end with the help of Pollard’s exceptional knock, Mumbai Indians were able to chase the humongous score of 219.

Meanwhile, In the first match of the second phase of IPL 2021 Mumbai Indians will face off against Chennai Super Kings in Dubai on September 19. Rohit Sharma-led franchise has an opportunity to create history by winning the title third consecutive time.