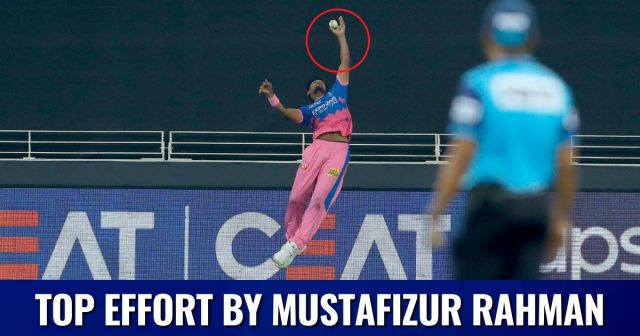 Bangladesh pacer Mustafizur Rahman picked the key wicket of Devdutt Padikkal in the final over of the powerplay to bring Rajasthan Royals back into the game against RCB. The Royals, after a good start, reached only as far as 149/6 in their 20 overs. evin Lewis top-scored with 58 as the other batsmen lost their way in the middle.

Meanwhile, in the ninth over of the RCB innings, Mustafizur Rahman brought out an acrobatic save in the fine leg boundary. Maxwell got a top-edge on his pull and the ball was sailing over the fence, but Mustafizur who was stationed in the deep times his jump to perfection gets his left hand to it and flicks the ball inside the boundary. He saved a certain six with his perfectly-timed jump.

The Royals lost their way in the back half of their innings after getting a good start from the openers. Skipper Sanju Samson (19) was dismissed cheaply which is why the Royals could not score over 160. Harshal Patel after picking up a hat-trick against Mumbai followed up with another three-for against the Royals.

Harshal Patel spoke to Star Sports about his hat-trick against Mumbai Indians. He took nine wickets against MI this season, making this a season to remember.

Patel said that during his hat-trick celebrations, he caused a bit of an injury to Mohammed Siraj and RCB skipper Virat Kohli. The medium-pacer also said that he enquired about Siraj’s injury post the celebrations.

Yes, Siraj’s leg is fine. That was the first thing I asked after the celebrations got over. Luckily, he is fine. During the hat-trick celebration, I scratched Virat’s thigh as well, so did quite some damage,” said Harshal Patel in a video posted on iplt20.com.