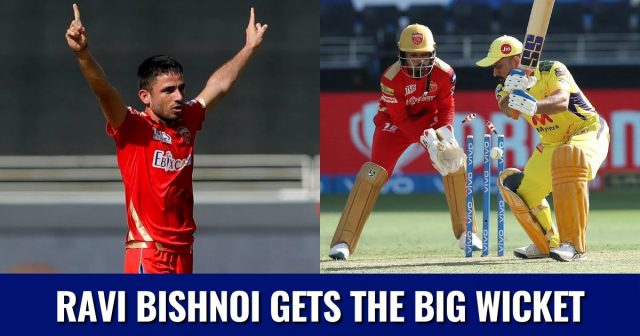 MS Dhoni had yet another poor outing with the bat against Punjab Kings. Coming into bat at number six, Dhoni scored 12 off 15 balls before he was dismissed by Ravi Bishnoi. CSK who have already qualified for the playoffs are fighting for a spot in the top two in the playoffs.

Bishnoi bowled a googly slower through the air and MS Dhoni was drawn early into the shot. The ball took the inside edge of the CSK skipper’s bat before disturbing the wickets. The side in yellow are in a bit of bothering to post a competitive wicket with half their side back in the hut.

Earlier in the game, Punjab Kings skipper won the toss and opted to field first. CSK started slowly and lost wickets at regular interval in the first half of their 20 overs. Dhoni’s wicket came at the wrong time for the side.

You Can See Me In Yellow: MS Dhoni

“Well you can see me in yellow, but whether I’ll be playing for CSK there are a lot of uncertainties around it for a simple reason that we have two new teams coming up. We don’t know the retention policy. We don’t know how many foreigners, Indian players we can retain, the money cap that every player will be cutting from the kitty. So there are a lot of uncertainties. Unless the rules are in place you can’t really decide that. So we will wait for it to happen and hopefully it will be good for everyone” said MS Dhoni at the toss when asked about playing for CSK in the next season.

“We are bowling first as we can have a look at the permutations and combinations to look at. The middle order has tried their best and hasn’t delivered at times. They are all quality players and performed for their respective teams. Just one change. Jordan comes in for Pooran” said Rahul.