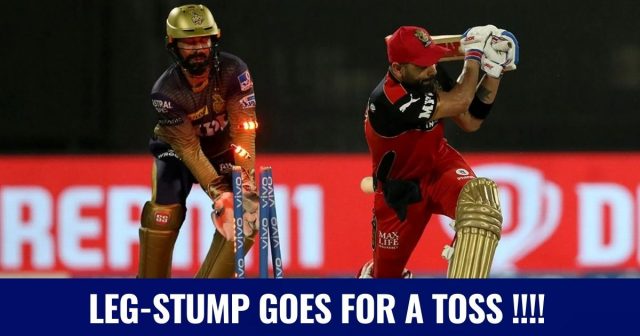 RCB skipper Virat Kohli is leading his side in the Eliminator clash against Kolkata Knight Riders. RCB won the toss and opted to bat first. Kohli along with Devdutt Padikkal added 49 inside the powerplay. Lockie Ferguson then dismissed the southpaw to give KKR their first wicket. Srikar Bharat, RCB’s hero from last game scored just ni e eating up 16 wickets in the process.

In the meantime, Sunil Narine has been bowling beautifully for KKR and has taken three out of the four wickets to fall. One of his wickets was Virat Kohli who tried to play his across the line. Narine bowled the off-stump line which disturbed the woodwork of Kohli. He got a quick start but failed to keep up the scoring rate once the powerplay was over.

Sunil Narine Gets The Better Of Virat Kohli

Narine meanwhile has bowled a spell of 3/19 as KKR are tightening the scoring rates of RCB. Virat Kohli had his game face on at ths toss where he spoke about keeping the basics the same heading into the Eliminator. The loser of this game will go home while the winner advances to qualifier two.

“We are going to bat first, looks like a great wicket, nice and hard. It gets tougher to bat here in Sharjah as the game progresses. No changes. A youngster steps up and wins you a game against a top side like Delhi. Very happy for KS. This is what this tournament is all about. Meetings have been pretty short and sharp. We have the ability to win games, nothing changes this being an Eliminator” said Kohli.

“We would have loved to bowl first anyways. The toss doesn’t bother us. We are feeling confident within the group, we are starting to come good as a team. We are playing with the same team” said KKR skipper Morgan.