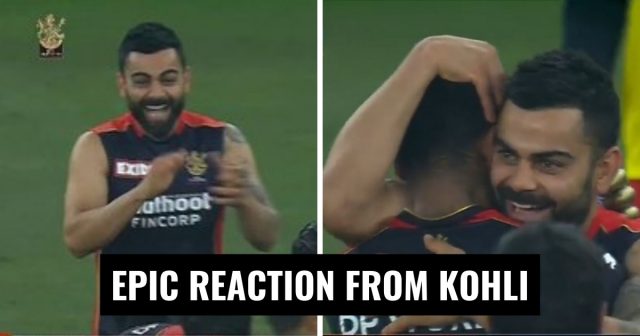 With five required to win off the final ball, Royal Challengers Banglore wicketkeeper-batsman KS Bharat hit a six to seal the game for Banglore. Despite the win, Virat Kohli-led side finished third on the points table and will play against Kolkata Knight Riders in the Eliminator in Sharjah next Tuesday.

KS Bharat thumped Avesh Khan straight back to hit the ball for a six. The scenes in the RCB dugout after Bharat’s hit was a spectacle to behold. RCB were in a tricky position in a chase of 166. Bangalore lost wickets early and were 6/2 in the second over. AB De Villiers added 49 with Maxwell.

Bharat then got into the act with Maxwell as he scored his career-best IPL score to take his team out of trouble. He added an unbeaten 111 with the Australian to given his team a come-from-behind-win.

KS Bharat spoke about his knock after the game. He was chosen as the Man of the Match for his unbeaten half-century.

“Great wining on the last ball, and an incredible feeling to finish it off. Maxi and I just kept telling each other to watch that ball till the end. I wasn’t nervous at any point and  was just looking for the right ball and the opportunity to hit it out. I have worked hard, I believe nothing comes for free. I work on my batting against spin. This will give us a lot of confidence” said the wicketkeeper-batsman from Andhra Pradesh.

RCB skipper was delighted to see his team get over the line from a tough situation. He also kept a word on his team heading into the crucial Eliminator clash on Tuesday.

“A win like this gives you the confidence. We have played well in Sharjah. We have been able to handle the conditions and keep the opposition in check if things have gotten away from us. We have the experience already and we need to utilize it as much as possible to keep moving on in this tournament.”

KKR became the fourth team to make the playoffs after Mumbai Indias could not win the game as per the equation that was required. They won the game by 42 runs in the end to win their seventh game of the season and finish fifth on the points table.