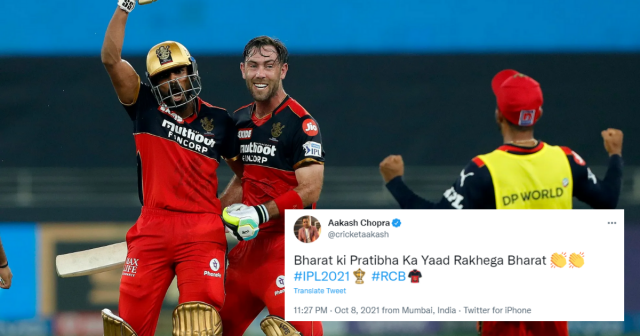 KS Bharat and Glenn Maxwell steer Royal Challengers Bangalore (RCB) to a 7 wicket victory against Delhi Capitals (DC) in their last IPL encounter of the season at the Dubai International Stadium. Coming in to bat first Delhi Capitals got off to a steady start courtesy of Prithvi Shaw and Shikhar Dhawan. After they were gone, there was a lull in the innings until Shimron Hetmyer helped them reach a fighting total of 164.

Beginning the chase, RCB lost both Virat Kohli and Devdutt Padikkal in their first 3 overs. AB de Villiers had a small cameo but it was Srikar Bharat and Maxwell who would build a steady partnership and which took RCB home eventually. This match went till the last ball when Srikar hit Avesh for a 6 to bring the match to a thrilling end, and winning hearts over Twitter.

KS Bharat remained unbeaten on 78 of 52 balls, while his partner Glenn Maxwell made a useful 51 runs off 33 delivers as RCB chased down DC’s target in the very last ball of their innings.

This is how Twitter reacted to Royal Challengers Bangalore’s Win:

That was some hit from Bharat. Great finish. Really like this player, must get more attention now.

#AxarPatel should be banned for firstly that casual effort and then laughing his guts out over it. Wth man, so casual in such a pressure situation! #RCBvDC

KS Bharat does what Arun Karthik did many years ago. Hitting a last-ball six to win a game for RCB. That midfield from Axar and the wide from Avesh proved costly. Looked like he was struggling towards the end but kudos to Bharat for seeing this through.

just in case India were looking for yet another keeper batsman in white ball cricket! #DCvRCB #IPL2021

Avesh Khan had a good laugh in the final over. But he forgot it's not the final ball.

Incredible feeling to finish it off – KS Bharat

KS Bharat, who scored an unbeaten half-century to take RCB home in the final ball, admitted that he was not nervous at any points of his innings.

“Great wining on the last ball, and an incredible feeling to finish it off. Maxi and I just kept telling each other to watch that ball till the end. I wasn’t nervous at any point and I was just looking for the right ball and the opportunity to hit it out. I have worked hard, I believe nothing comes for free. I work on my batting against spin. This will give us a lot of confidence.”