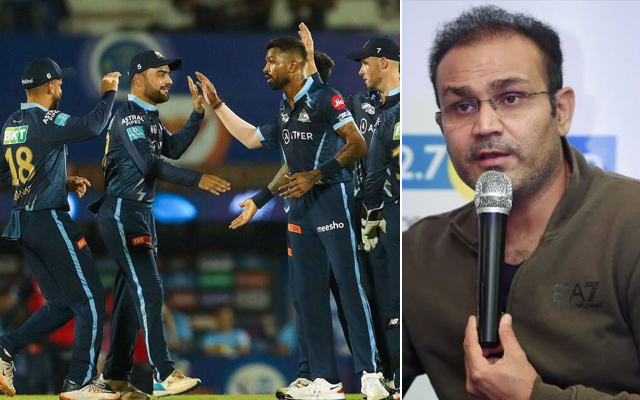 Former India cricketer Virender Sehwag feels that luck did not play much of a part in Gujarat Titans’ success in the Indian Premier League 2022 season. The team has performed exceptionally well in their debut season, finishing the league stages at the top of the table.

The Gujarat Titans defeated the Rajasthan Royals on Tuesday in the first qualifier to enter the finals of the Indian Premier League 2022 season. They chased down 189 runs with seven wickets to spare on the back of a brilliant 68 runs knock by David Miller. Skipper Hardik Pandya and Shubman Gill also made valuable contributions in the match.

Reflecting on Gujarat Titans’ performance in the season so far, Virender Sehwag said on Cricbuzz,

“Cannot attribute their season down to just luck. They were never reliant on other results like RCB. They have worked hard, they have planned. It is not right to say that they had luck and things like the law of averages. They bought Tewatia for the sole reason of hitting sixes and he won a couple of matches for them doing exactly that.”

“If you see the bowling unit they have assembled, they have one of India’s best bowlers, Mohammad Shami. They have young bowlers like Yash Dayal and Sai Kishore. Experience is there in the form of Jayant Yadav. They have picked top-quality bowlers, even from domestic cricket. This bowling attack can defend even 150-160,” said Parthiv Patel.

The Gujarat Titans will face the Rajasthan Royals in the finals on Sunday at the Narendra Modi Stadium. They will be hoping to lift the Indian Premier League trophy in their debut season.