Rajasthan Royals skipper Sanju Samson has led his team to the finals of the Indian Premier League (IPL) 2022 season by defeating the Royal Challengers Bangalore in the second qualifier. Following the win, Samson’s wife Charulatha Ramesh shared a story on her Instagram, aimed at the IPL broadcasters.

Ahead of the Indian Premier League 2022 season’s opening clash, the broadcasters released a video with caricatures of the captains and the players of the teams. However, in the video, the Rajasthan Royals skipper Sanju Samson and his team were missing.

Charulatha posted a screenshot of the video recently, and added, “Saw this animated video showing the race for IPL 2022 on the first day of IPL. And wondered why there wasn’t any pink jersey.”

In her following Instagram story, Charulatha shared an image of the Rajasthan Royals’ squad reaching the final captioned: “AND FINALS! Grateful”. 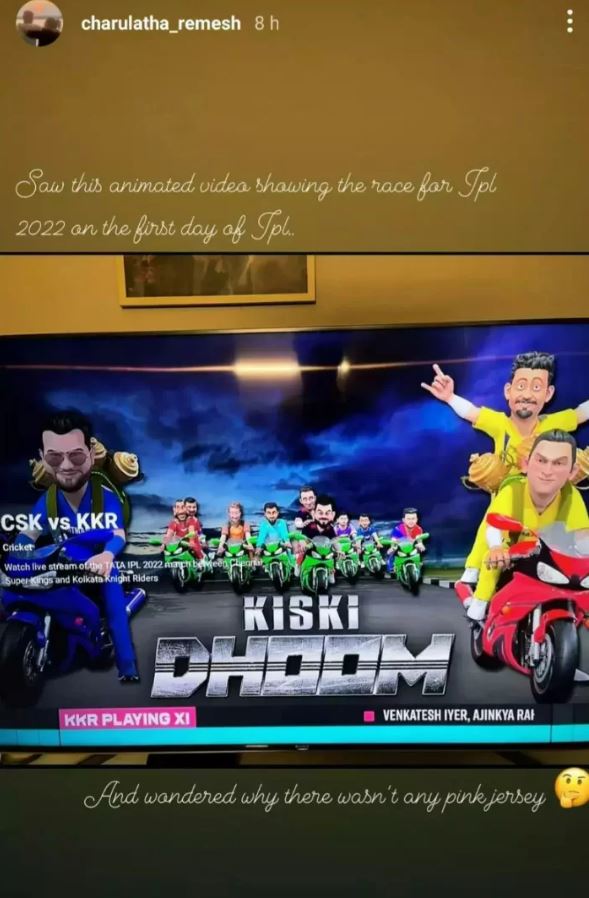 Rajasthan Royals to take on Gujarat Titans in IPL 2022 Finals

The Sanju Samson-led Rajasthan Royals team will battle against the Gujarat Titans in the finals of the Indian Premier League 2022 season on Sunday, May 29 at the Narendra Modi Stadium in Ahmedabad.

The Rajasthan Royals finished the league stages with 18 points. They had won nine out of their fourteen matches and were second on the points table. The Royals faced a setback when they lost the first qualifier against the Gujarat Titans. However, they made a comeback in the next game, to storm into the finals.

Skipper Sanju Samson has led the franchise impressively well this season. He has also made valuable contributions with the bat. Samson averages 29.60 in sixteen matches. The Rajasthan Royals side boasts of the leading run-scorer Jos Buttler and the joint leading wicket-taker, Yuzvendra Chahal.

With several match-winners in the team, the Rajasthan Royals will be determined to lift their second Indian Premier League title this season.

[Watch] Rishabh Pant Goes Against Team Protocol; Does Something That Was Not Asked To...

IRE VS IND 2022: Aakash Chopra Picks His India Playing XI For The First...

[Watch] Rishabh Pant Goes Against Team Protocol; Does Something That Was...