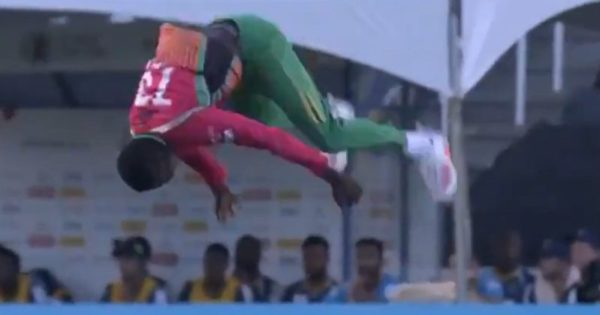 The Caribbean Premier League (CPL) is considered to be the biggest party in cricket. All the West Indies players are at their best the T20 league every year. When we take about West Indies players their unique celebrations always pops in the mind first. Recently Guyana Amazon Warriors bowler Kevin Sinclair celebrated his wicket by doing an outrageous ‘Double Somersault’.

Guyana Amazon was facing the Barbados Tridents in a significant match in CPL 2020. When in the 16th over of the innings, Sinclair sent Kiwi all-rounder packing as he cleaned him up with a brilliant delivery. As soon Sinclair picked the wicket he has off and celebrated as if he was a gymnast.

The official twitter account of CPL had to share this celebration of Sinclair with all the fans and captioned it as, “Gymnast or Cricketer?! Now that’s a CELEBRATION”.

The wicket celebration was truly breathtaking and something which not many can execute. Afghanistan wizard Rashid Khan too tried replicating the wicket presentation of Sinclair in his own way which had everyone in splits. Here is the video of Rashid Khan trying somersaulting after picking a wicket.

Meanwhile defending champions put on a terrible show with the bat and managed a paltry 89/9 in the stipulated 20 overs. While from the Guyana Amazon Warriors, Romario Shepherd and Imran Tahir were the most successful of the bowlers, with both picking up three wickets respectively.

Moreover, the Guyana Amazon Warriors, in the end, won the match comprehensively by six wickets. They chased down the target in the 15th over and knocked the defending champions out of CPL 2020.

This ended up being a disastrous CPL for Barbados tridents who managed only two wins from nine matches and were second-last in the six-team points table with just four points.