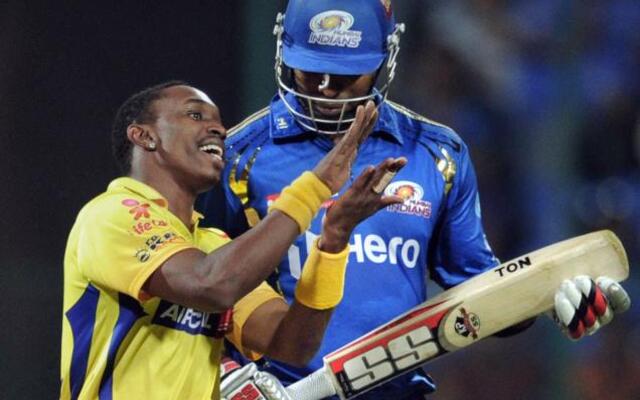 Mumbai Indians vice-captain Kieron Pollard hilariously trolled Dwayne Bravo after Mumbai Indians avenged the Delhi Capitals for the fourth time in this season as they lifted the IPL trophy for the fifth time in history. The only franchise that is second to Mumbai Indians is Chennai Super Kings who have won the title three times.

The match between Mumbai Indians and Delhi Capitals took place in Dubai where Delhi batting first scored a mere 157 at the end of 20 overs. In return, Mumbai Indians openers went hard at the Delhi bowlers as they chased down the target with 8 balls to spare, marking the fifth IPL title as captain for Rohit Sharma from his overall record of 6 titles including the one which came for Deccan Chargers in 2009.

Kieron Pollard who has been a part of the Mumbai Indians franchise since 2010 decided to take a dig at Dwayne Bravo after the conclusion of the match during one of the interviews as the big man Kieron Pollard now has 15 T20 titles under his belt compared to Dwayne Bravo who has 14 which include three titles he had won whilst playing for the Chennai Super Kings franchise.

Pollard also added how winning the IPL again for Mumbai Indians is a great feeling as he has been with the side for 11 years now. He further stated that Mumbai Indians is by far the best T20 team going around in the world right now.

“It’s a great feeling, means a lot. Fifth trophy.. Have been here for 11 years. We have a quiet celebration. The amount of trophies, the amount of talent that’s there, you can say MI is the best T20 team going around. The management, the support staff, the effort they put in to make. Dwayne Bravo you are behind me now (about number of T20 titles), I have to say that on camera (smiles),” Pollard said.

Incidentally, Kieron Pollard and Dwayne Bravo both were part of the victorious CPL campaign for Trinbago Knight Riders couple of months back as they went on to clinch the title on a winning streak of 10 matches in the league stages.