Kolkata Knight Riders batsman Shubman Gill is in a good space at present. He has had a decent start to his Test career and has almost confirmed his berth with consistent scores at the top. Recently, the young batsman from Moga shut down a troll who called out for his ‘Tuk Tuk’ approach in the last IPL season in the UAE where Kolkata bowed out from the group stages.

Gill made his Test debut for India during the 2nd Test of the 2020-21 tour to Australia and immediately made an impact with the bat. He played all the Test matches against England and has scored 378 runs from seven Tests thus far with three half-centuries. Shubman Gill scored three half-centuries in his first 10 Test innings with a top score of 91 in the crucial Brisbane Test against Australia earlier this year.

India won that Test to win a second consecutive series on Australian soil despite having several big names on the bench due to injuries and leaves. After his international commitments, the young batting prodigy has joined the Kolkata Knight Riders squad for the upcoming IPL 2021. Recently, the Knight Riders shared a picture of Shubman Gill on their Instagram handle where he can be seen playing a shot.

Some social media users had questioned Gill’s selection in the Indian cricket team on what they perceived as based on IPL performances. A reference to “tuk tuk”, which apparently referred to a player with a low strike rate, was made and that did not go down well with the KKR batsman. Shubman Gill had a strong reaction for that user and shut him down saying, “i am right where i want to be Mr. NOBODY.” 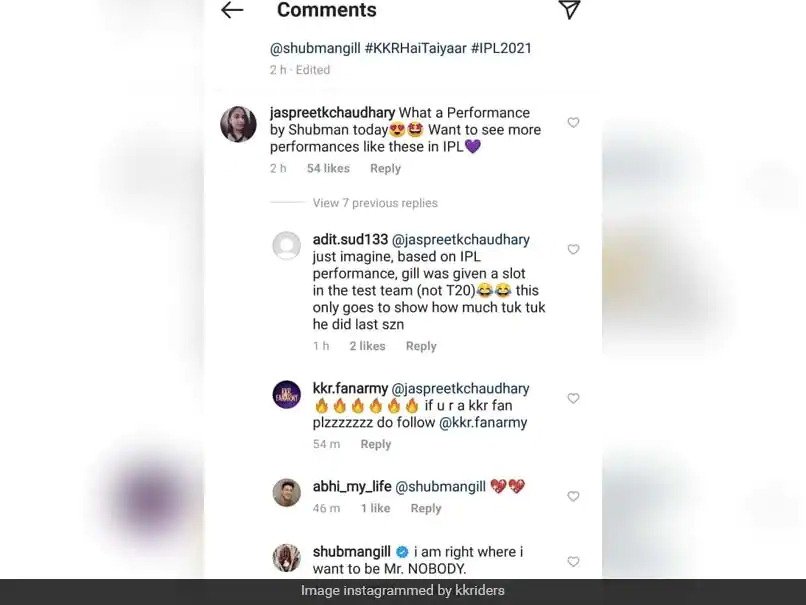 So far, Shubman Gill has played three IPL seasons for KKR and has scored more than 200 runs in each of them. The right-handed batsman has 939 runs from 41 matches at a strike rate of 125.20 and he scored 440 runs from 14 games for KKR last season. He will have to be in good touch and Kolkata Knight Riders look to add to their title tally.

The Eoin Morgan-led side begins their IPL 2021 campaign on April 11 against Sunrisers Hyderabad in Chennai.