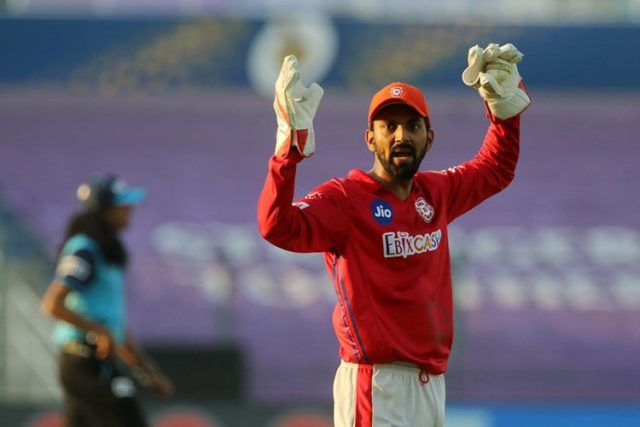 Kings XI Punjab skipper KL Rahul took a dig at the third umpire after Faf du Plessis departs in the wake of the controversial decision from Chris Gaffaney. Meanwhile, Chennai Super Kings got off to a flying start in the 154 runs chase at the Sheikh Zayed Stadium in Abu Dhabi.

Ruturaj Gaikwad and Faf du Plessis got off to a flying start hitting the gaps with ease. They put every bowler at bay to be on track of the run chase. Gaikwad looked fluent before a controversial decision from the third umpire gave him a life which left KL Rahul and Anil Kumble livid.

It was flighted outside off by Ravi Bishnoi as Ruturaj Gaikwad sliced the drive towards backward point. Mandeep Singh dived forward and grasped it close to the ground. The third umpire has a look and goes in favour of the batsman. But looked like some part of the ball was touching the grass, it was not conclusive enough and that’s why Kings XI are not happy.

KL Rahul cannot believe it. He has a word with both umpires. Kings XI Punjab head coach Anil Kumble was also on his feet in the dugout wanting a word with the fourth umpire I guess. Although Punjab moved forward but Rahul looked seemingly irritated with the decision and showed an outrage after Faf du Plessis got out.

Chris Jordan took pace off as Faf lobbed it towards short fine and KL Rahul runs across to take an easy catch. He completed the catch and made a gesture with his hands up to the third umpire in utter disappointment.

Meanwhile, Chennai Super Kings are cruising to victory with only 47 runs required from 38 deliveries. Ruturaj Gaikwad and Ambati Rayudu look settled in the middle and hope to take them home without any more hiccups.