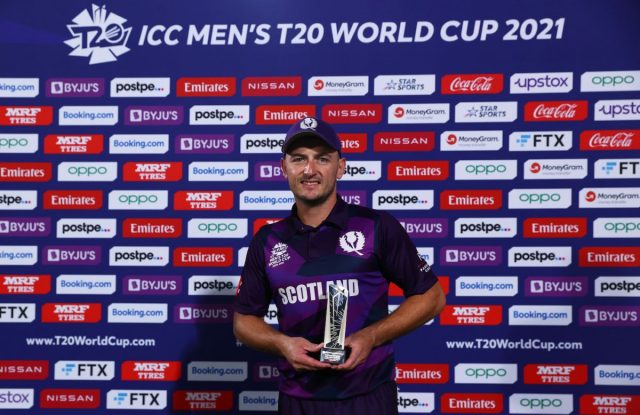 Scotland captain Kyle Coetzer said that there is no lack of talent in Associate Nations and they only need is a stage to showcase it at the highest level. However, Coetzer addressed the press after leading his team to a stunning 6-run win over Bangladesh in their T20 World Cup opener in Oman on Sunday.

Meanwhile, it was their first-ever win over a Test-playing nation in an ICC tournament at the Al Amerat Stadium a swell. After being sent into bat, Scotland were reduced to 51 for 6 but Chris Greaves smashed 2 sixes and 4 boundaries for his 28-ball 45 as Scotland put up 140 in their allotted overs. They restricted Bangladesh for 134/7 in 20 overs to registered the win.

Chris Graves starred with the ball too as he dismissed Shakib Al Hasan and Mushfiqur Rahim just when they were looking to take the game away from them. However, after that, Bangladesh never recovered and eventually lost the game.

An excellent performance with the bat as well as two vital wickets!#T20WorldCup pic.twitter.com/NujVMRsLDF

While talking about Chris Greaves’s journey to the T20 World Cup, captain Coetzer said he has made a lot of sacrifices to be in the highest level of cricket. Notably, Greaves made his international debut only earlier this month, claiming a 4-wicket haul against PNG in Dubai.

“I am really proud of Greaves. he really sacrificed a lot. He was delivering parcels for Amazon not too long ago, and now is getting Player of the Match against Bangladesh. I am not sure if he will appreciate me saying this,” Coetzer said.

“Seeing the performance from Mark Watt and Chris Greaves with the bat today, they are lesser-known people who had to make many sacrifices to get to where they are today,” he further added.

“Greaves isn’t a contracted player in Scotland. He was on the fringes. He put his hand up, worked extremely hard and put himself in the picture. Going back a month, he wouldn’t even start in one of these games. Look at what he has done. It is just proof in the pudding that there are some quality players around Associate cricket. They just need the platform to show it,” the skipper said.

“We believed we can achieve this win” – Kyle Coetzer

Meanwhile, Kyle Coetzer said that the win against Bangladesh is certainly a reward for the hard work everyone put in prior to the T20 World Cup. He also said that the players did not lose focus even when some of their tours got cancelled due to the Covid-19 pandemic.

“We believed we can achieve this win. It didn’t quite go all our way, but it is a special feeling to beat Bangladesh. We have been planning for this tournament for a long time. We only played together as a group two months ago, after waiting a long time following the qualifiers,” he said.

“Guys were working hard behind the scenes, but it sometimes seemed we were working for nothing. Our tours kept getting cancelled. It was hard to manage, but this is reaping the rewards of keeping the faith that we will be a better team when this tournament comes around,” he shared.

Scotland will next take on PNG on October 19 at the Al Amerat Stadium in Oman.