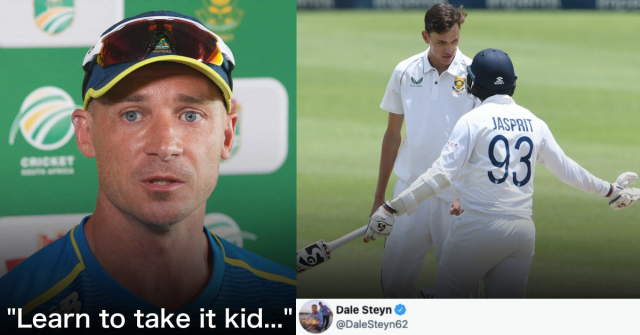 Former South African pacer Dale Steyn has hit back at Jasprit Bumrah after his on-field altercation with Proteas pacer Marco Jansen on day 3 of the Wanderers Test. Meanwhile, it all started after Jansen unleashed a barrage of bouncers against his Indian counterpart.

Bumrah took a couple of blows on his shoulder before having an intense chat with Marco Jansen, who is playing only his second Test. The things aggravated quickly and the umpires had to intervene to separate the two.

Meanwhile, Jasprit Bumrah’s reaction didn’t go down well with Dale Steyn, who took a peg out of Bumrah’s showdown with England pacer James Anderson to give the former a lesson. Taking to Twitter, Steyn wrote:

“I swear I remember Bumrah doing the same thing to a Mr James Anderson not too long ago. Learn to take it kid.” 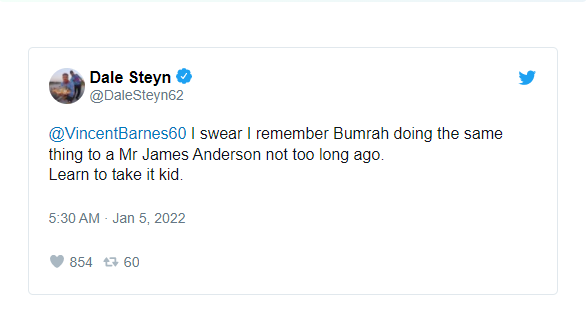 Meanwhile, Jasprit Bumrah’s stay in the middle didn’t last long and he was out scoring 7 runs off 14 balls. India managed to post a target of 240 runs with South Africa showing signs of chasing the total down.

Skipper Dean Elgar has led the side from the front with an unbeaten 46 as South Africa are 122 runs away from levelling the three-match series.

South Africa’s batting consultant Justin Sammons stated that Dean Elgar’s show with the bat will largely decide the fate of the match. Speaking at the end of the day’s play, he said:

“He’s a competitor. The thing he loves about the game is the competitiveness. The competitive nature of the Test cricket brings the best out of him.