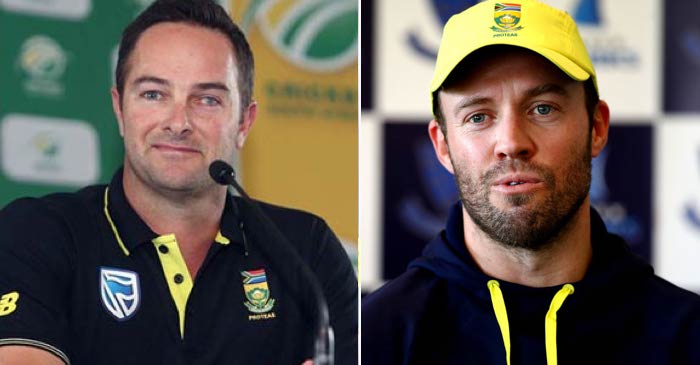 South Africa coach Mark Boucher has explained the reason behind AB De Villiers not willing to come out of retirement. Cricket South Africa confirmed De Villiers’ call to not return to play international comeback on Tuesday. The former South African skipper announced his retirement in 2018 and CSA has put an end to any further speculations of his return.

Mark Boucher talking to The Citizen has explained the reason behind De Villiers’ unwillingness to come out of retirement.

“AB has his reasons, which I respect. Unfortunately, he’s no longer in the mix. I say unfortunately because I think we all agree that he’s still one of the best – if not the best – T20 players in world cricket,” Boucher told The Citizen. “

Boucher further said that De Villiers was reluctant to come out of his retirement thinking about the young players in the squad who have been a part of the team in the last couple of years.

“But he alluded to being concerned about coming in ahead of other players who have been a part of the system. I don’t think it sat well with him, which I understand.”

The comeback of AB de Viller was first spoken about during the 2019 World Cup when Faf du Plessis said that de Villiers had offered to come out of retirement but his request was turned down keeping the hard work of other players in mind.

South Africa performed awfully in the 2019 WC, becoming the second team after Afghanistan to be knocked out. With a fresh World Cup awaiting, Boucher feels it is best everyone moved on from the de Villiers saga.

“As a coach I needed to try and get our best players, for the team and the environment. AB is an energy-booster in any environment, but I respect his reasoning. It was worth a go, but now let’s move forward,” Boucher concluded saying.