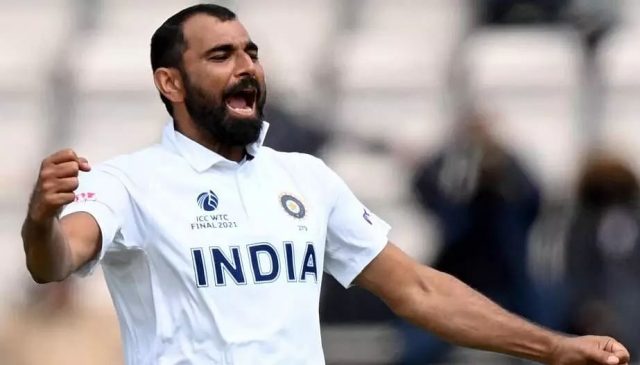 The marquee India tour of England is just a few weeks away. The first Test match is scheduled to begin just 2 weeks away from now. Virat Kohli-led India is grinding hard and participating in intense practice sessions before the match. Notably, team India recently faced off in a warm-up game against County select XI. However in the end,the match  ended in a draw. Also with the big series approaching,India’s ace fast bowler Mohammed Shami looked pumped in an intense practice session.

The 30-year-old was seen grinding hard in nets, he was seen doing his amazing trademark run-up display and clean bowling action. Mohammed Shami uploaded a video on social media to share his training video with his fans. The video was under one minute and constituted three deliveries.

The right arm pacer bowled three deliveries in the video the first delivery was a good length one which troubled the batsman a little bit. The second delivery was a full-length delivery which the batsman played on to the leg side. The third and final delivery was delivered in the perfect line and length and was well-guided towards stumps.

Meanwhile, Mohammed Shami uploaded the video on both Twitter and Instagram. The video has crossed over 7000 views on Twitter. Also, the video has been viewed more than 1 lakh times on Instagram. Shami captioned the video as “Practice Session #mdshami11”.

The practice match between India XI and County XI saw KL Rahul and Ravindra Jadeja’s amazing display with the bat. Meanwhile, KL Rahul scored a century before getting retired hurt. Also, Jadeja went on to score a fifty in both innings. However one of the biggest highlights of the match was the banter between Washington Sundar and Mohammad Siraj.

The India tour of the England Test series will start on 04 August 2021, at 03:30 PM. The first Test is scheduled to take place in Nottingham from August 4 to 8. The Virat Kohli-led side will be looking forward to starting their WTC cycle with a victory.