Ask any 90’s kid – What they know or think of Kenya. I can assure you amongst other things, they all will have a memory of an underdog Kenyan cricket team beating cricketing giants like West Indies and watching them steer through to the 2003 World Cup semi-finals.

They all will vaguely tell you even names of their cricketing legends like Maurice Odumbe, Thomas Odoyo and of course the great Steve Tikolo. So it’s nothing but a shocking fact that the last international match that happened in Kenya was way-way back in 2010. Almost 12 long years ago. So what went wrong?

Without getting into the details – Kenya cricket suffered because of major corruption, match fixing scandals, in fighting within the administration and not investing enough in their domestic structure. Former captain Asif Karim summed it up well in a sentence in an article for ESPNCricinfo in 2014 – “Kenya Cricket is dead and buried.”

Cut to 2022 – Enter ‘SMW’ or “Sports & Media Works” – a sports and media production firm formed by two enterprising sports enthusiasts from Mumbai. Mikkhail Vaswani, Co-founder and President of SMW said, “We were looking for the correct place and opportunity to buy rights for an international cricket event. Kenya was always on our radar. It is by far the biggest economy in East Africa, It’s a democracy – but most importantly it has a rich, glowing cricket culture. I instantly knew this was the right place to shop.”

But the path wasn’t easy. No cricket had happened in Kenya in a long time. Every thing around cricket in Kenya was being seen with a pessimistic lens. Cricket Kenya had just held fresh elections & appointed a new chairman – Mr. Manoj Patel. He brought different factions together and vowed to bring Kenya cricket back to its glory days.

“We met Mr. Patel in Mumbai and told him that we are willing to give all our support, experience and resources to bring international cricket back to Kenya. I called it ‘The Resurgence,” laughs Azhan Ahsan, co-founder and CEO of SMW.

Talking to Patel was one thing, but convincing other countries to come over was a steep challenge. Cricket Kenya initially thought to organize a quadrangular series. But no one was willing to come over on such a short notice. Eventually based on rankings and industry knowledge, SMW gave them a list of 10 countries to approach.

“We were certain 1 or 2 will definitely click. And it did. Nepal said yes to Cricket Kenya’s request to tour for a bilateral series consisting of five T20I’s and three One Days. We could not have been any more happier. It’s a rising Asian giant. Ranked 12th in T20I’s and a super active fan base,” said Mikkhail. 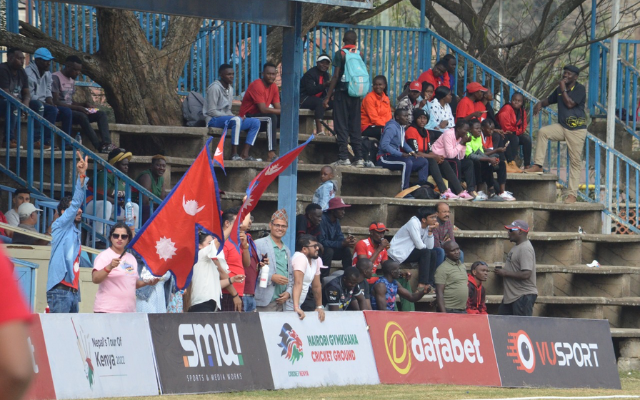 On 25th of August 2022 – with the 1st T20I match at Nairobi Gymkhana, the very same venue on which Yuvraj Singh and Zaheer Khan made their debuts way back in 2000 – International cricket returned to Kenyan shores.

“It was a super proud moment for us. SMW had overcome some significant challenges to make this moment happen. It all became extra special when the stands were filled with people. The pessimism was gone. The fans were back and you could just see joy on the faces of thousands of people around.”

Still there is a long way to go before cricket in Kenya can match the status it had achieved in late 90’s early 2000’s. But if more such events can take place the day isn’t far when Kenya shine again on the international stage.

The event was sponsored and backed by international and domestic brands. SMW handled all sales, organizational & production duties. The broadcast set up had eight HD cameras, full cricket graphics, replays, and English commentary.

Azhan adds, “From a production stand point, we didn’t want to leave any stone unturned. Even though we had budget limitations, we brought in industry veteran – Mr. Charu Sharma to lead the commentary team and also got former Kenyan greats Mr. Steve Tikolo & Mr. Kenny Obuya to support him.”

“Matches were broadcast worldwide on TV and OTT platforms. In India, it was streamed on Vu Sports and almost every match had a million views, which is significant.”

Charu Sharma summed up SMW’s effort best by noting that at times you need someone to come along who puts their hands up and says that yes we will take the responsibility. SMW did it for cricket in Kenya. Well done to them.

“Well we are certain Kenyan cricket will only grow further from here. 10 years down the line, we can look back with a smile that it was us who played perhaps a small but a very important role in this resurgence. That small credit will always be SMW’s.”