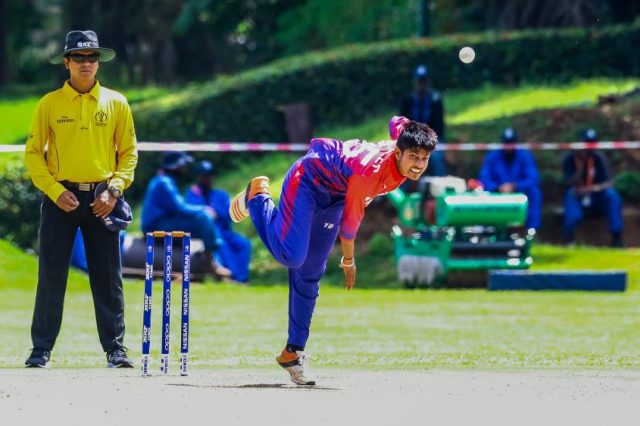 Already a T20 globetrotter at 21 years old, Nepal leg-spinner Sandeep Lamichhane has been voted as the ICC Men’s Player of the Month for September. Sandeep got the better of Bangladesh left-arm orthodox Nasum Ahmed and USA’s hard-hitting batter Jaskaran Malhotra, who also had some notable performances this month.

Malhotra was in the limelight when he smashed six sixes in an over off Papua New Guinea pace bowler Gaudi Toka in a one-day international, becoming only 4th batsmen to achieve this feat.

💥 Spin-tastic bowling
💥 Leading from the front

Some brilliant performances saw these stars being voted as the Men’s and Women’s #ICCPOTM for September!

Find out who they are 👇

Ahmed was brilliant with the ball when Bangladesh won the T20I series against Newzealand. He picked up 8 wickets in the series and was adjudged player of the series too.

Sandeep Lamichhane beat them to be the ICC Player of the Month for September 2021. He had great outing in Oman when Nepal played two-match ODI series against PNG, followed by ICC Men’s Cricket World Cup League 2 matches against host side Oman and USA.

He played 6 ODIs and bagged 18 wickets at an average of 7.38 and an impressive economy of 3.17 and was pivotal in every Nepal’s victory. Two of his remarkable performances came against PNG when he registered 4 and 6 wickets-haul in the first and second match respectively. He also put on a great show against Oman to register a 4/18 match figure, guiding his side to a historical win.

England captain Heather Knight was voted the Women’s Player of the Month, beating some stiff competition from her teammate Charlie Dean and South Africa’s Lizelle Lee. She made some useful contributions during England’s home series against New Zealand.

Knight scored 214 runs at an average of 42.80 and was also tidy with the ball, scalping three wickets at an economy of 4.66.