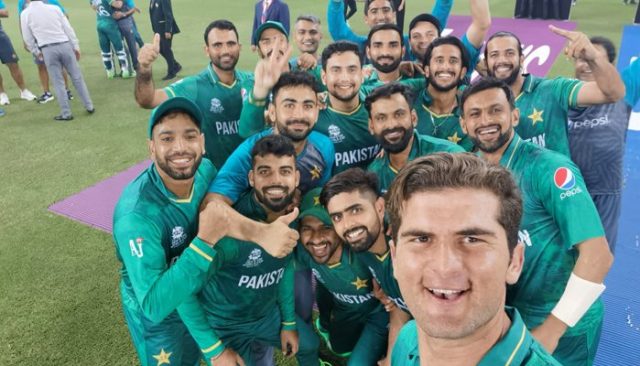 The Pakistan Cricket Board (PCB) has named an 18-man squad for their upcoming three-match T20 series in which will be played in Bangladesh. Relieved before, veteran all-rounder Mohammad Hafeez has opted out of the series, wanting to give youngsters a fair chance.

Mohammad Hafeez discussed this matter with chief PCB selector Mohammad Wasim before taking this decision and withdrawing himself from the series, which remains the only change from their 2021 World T20 squad. Iftikhar Ahmed has replaced Hafeez, while the middle-order also includes Haider Ali and Khushdil Shah.

Pakistan and Bangladesh will face each other in three T20s in Dhaka on November 19th, 20th, and 22nd. The tourists’ squad for two Tests, scheduled in Chittagong from 26th-30th November and 4th-8th December in Dhaka, is yet to be announced.

The Coaching setup of the PDC will be the same as the ongoing T20 World Cup. However, batting consultant Matthew Hayden will no longer be continuing due to prior commitments.

Pakistan are already into the semifinals of the ICC T20 World Cup 2021 and will lock horns with Aaron Finch-led Australia in the knockouts. They have won all their group matches to top Group 1 and reach the semifinals.

Babar Azam & Co will hope to keep up the same brand of cricket to beat Australia and book a final berth on November 14 in Dubai.