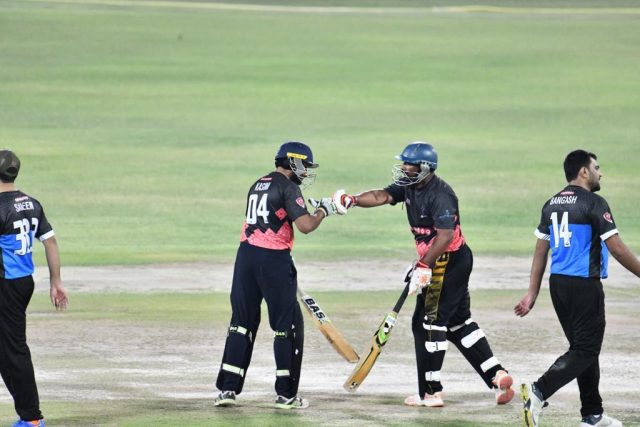 The first game of the day saw Prime Gladiators lock horns with Stallions Sports Center. Opting to bat first, the Gladiators scored 92/5 in their quota of 10 overs. Mahbubur Rahman (36 off 25 balls) and Subair Kabeer (21 off 15) did the bulk of the scoring for their side.

Ronak Singh was the pick of the bowlers for the Stallions, picking up 3/10 in his two overs. However, he lacked support from the other end as Prime Gladiators posted a challenging total on the board.

In reply, Jack Joemon Joseph powered the run chase for Stallions Sports Center. He played a valiant knock of 27 runs, decorated by two boundaries and as many sixes. But Abul Bashar and Faysal Anower bowled exceedingly well to keep Prime Gladiators in the game. With 18 runs required off the final over, Omar Sayed conceded 12 runs to help the Gladiators begin the tournament on a winning note.

The second game of the day saw Star CCC beat Pak Afghan by 40 runs. Batting first, Star rode on a breathtaking knock from Fairoos Fairu to score 131/2 in their 10 overs. The openers got off to a blazing start to add 48 runs for the first wicket. Since then, it was all about Fairoos, who struck five sixes and two boundaries to post a mammoth total on the board. He was unbeaten on 53 runs from 25 balls, scoring at a strike rate of over 200.

In reply, Pak Afghan crumbled in front of the scoreboard pressure. They lost both their openers within the first two overs with only one run on the scoreboard. Muhmmad Saleem tried to put up a show but lacked support. Eventually, they finished at 91/7 in their 10 overs. Prime Gladiators captain Jomon George was the pick of the bowlers, scalping three wickets.