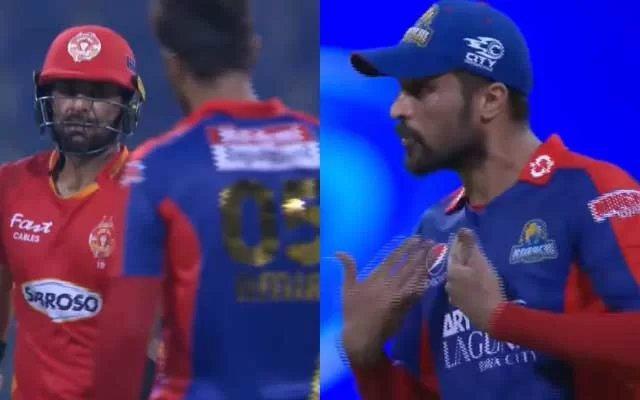 The 6th edition of the Pakistan Super League has restarted in a grand fashion. The 22nd match of the tournament was between Karachi Kings and Islamabad United. It was an interesting game and the fans thoroughly enjoyed it.

However, during the match, Mohammad Amir of Karachi and Iftikhar Ahmed of Islamabad got into a heated altercation thanks to Iftikhar Ahmed basically sweeping Amir for a boundary on the last ball of his previous over.

This incident took place during the 15th over. Mohammad Amir bowled a full toss and Iftikhar Ahmed bent on one knee and slapped the ball on the leg side for a boundary. This boundary added to Amir’s woes as he was having a bad day with the ball.

Amir began saying something to the batter after the over ended and Iftikhar retaliated with some heated words as well. The whole altercation was getting heated much more when Karachi Kings skipper Imad Wasim came in support of Amir and got into a heated talk with Iftikhar himself.  The situation finally cooled down when the umpires Asif Yaqoob and Rashid Riaz intervened and advised the players to maintain the peace.

Islamabad captain had won the toss and elected to field first. Karachi Kings posted a total of 190 runs for the loss of 4 wickets. Babar Azam scored 85 runs(7 fours, 3 sixes) and Najibullah Zadran made 71 (5 fours and 4 sixes). These two had a brilliant partnership of 117 runs and helped the team post this total.

In reply, Usman Khawaja fell for 12, and Muhammad Akhlaq fell for 1 run for Islamabad united. But then Colin Munro (88* with 12 fours and 2 sixes), along with Iftikhar Ahmed (71* with 5 fours and 5 sixes) decimated the Karachi bowling attack and won the game for Islamabad United with 8 wickets and 8 balls in hand.