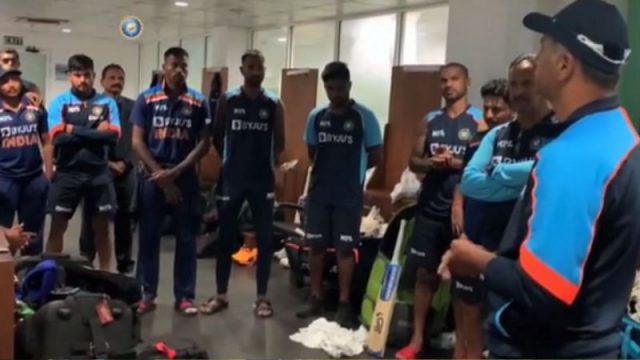 India’s bowling All-rounder Deepak Chahar’s outstanding innings against Sri Lanka has been the talk of the town. He got together with Bhuvaneshwar Kumar to hand India a three-wicket win. The two contributed 84 runs for the eighth-wicket stand. Chahar was the Player of the Match for his 82-ball 69 runs knock.

Speaking at the virtual press conference after the match, Deepak spoke about the backing that he received from Rahul Dravid. He also joked that the India coach is now a “pure India ka Gunda”. Chahar said:

Rahul Dravid recently featured in a TV commercial for the Cred app, where he played the role of an angry man on the street. The dialogue ‘Indiranagar ka gunda’ has become famous after that commercial.

I have always worked on my batting: Deepak Chahar

Deepak Chahar spoke about the influence of MS Dhoni’s batting on his game. He said that watching Dhoni finish games has been a big factor for him, to pace his innings. Chahar also stated that he always speaks to his father about batting, and it doesn’t matter if people see him as an allrounder.

“I talk to him, we always talk about my batting. It doesn’t matter if people see me as an all-rounder or not. The batsman who is playing alongside me will get confidence that I can hang around and will not give my wicket away. It is very important for a batsman to know that his partner will support him. It doesn’t matter if they see me as an all-rounder or not,” Chahar added.