Premier Indian all-rounder Ravindra Jadeja is a household name in Indian cricket. He is one of the cricketers who play in every format for the team and is a crucial member of the outfit in all formats as well. He is currently recovering from his thumb injury which he survived in Australia. Subsequently, he missed the fourth Test match in Brisbane and the Test series against England. He is not included in the limited-overs squad against England either.

He is likely to be fit in time for the IPL for Chennai Super Kings and the World Test Championship final later in June. India will take on New Zealand in the final at Southampton after Lord’s was scraped by the ICC over COVID concerns.

Meanwhile, Ravindra Jadeja has responded to a question posed by IPL franchise Rajasthan Royals on Instagram. On Wednesday, the Rajasthan-based franchise kickstarted a discussion about who will be the best player in the gentlemen’s game four years later. 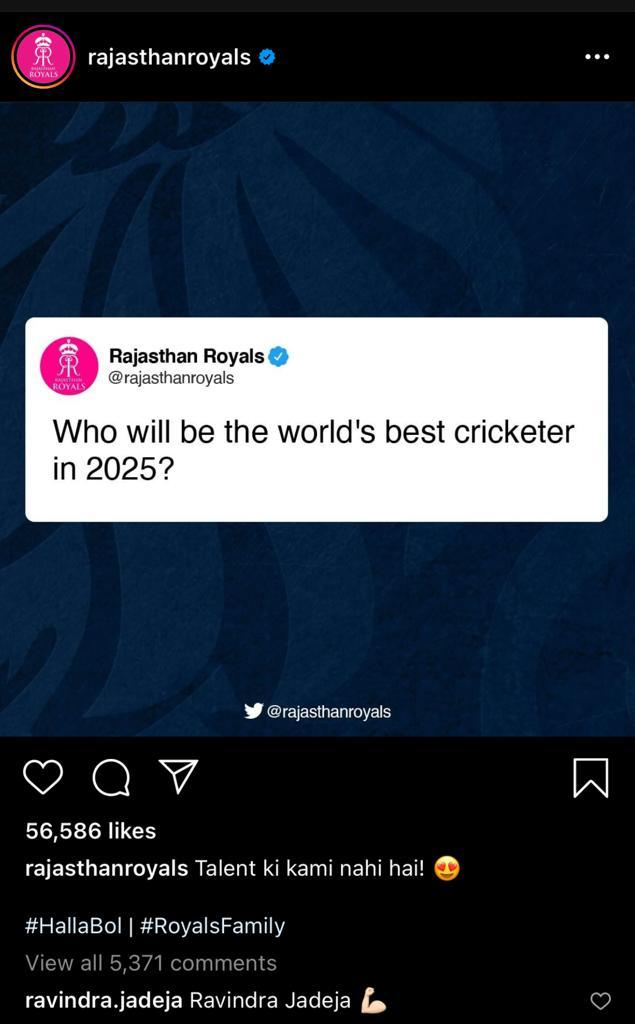 Ravindra Jadeja responded to the question from the IPL franchise with an emoji of flexed muscles which became an instant hit with his fans. Even the Rajasthan Royals were happy to end the debate by acknowledging Jadeja’s remark.

Jadeja was declared India’s Most Valuable Player’ (MVP) of the 21st century by a reputed cricket magazine in 2020. Jadeja has played 51 Tests, 168 One Day Internationals (ODIs), and 50 T20Is for Team India.

In the IPL, he has played for four franchises so far. He started with the Royals winning the inaugural edition of the IPL with them. The veteran Indian all-rounder has played as many as 184 matches in the IPL for Gujarat Lions, Kochi Tuskers Kerala, and Chennai Super Kings. The Indian all-rounder who joined CSK in 2012 was retained by the franchise in 2014 and has been a constant ever since.