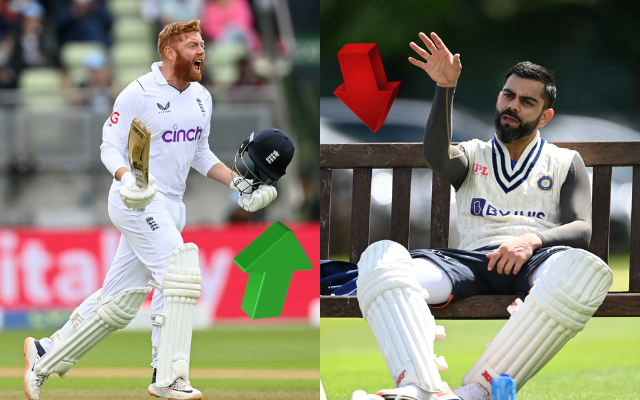 ICC released the Latest Men’s Test Player Rankings on Wednesday. Rishabh Pant and Jonny Bairstow have been rewarded for their recent batting performances. On other hand, Virat Kohli for the first time in 2,053 days is out of the Top 10 list.

In the Rescheduled 5th Test at Edgbaston, Virat Kohli only managed scores of 11 and 20. He has now dropped down by three places in the rankings and sits at the 13th spot.

Among Indian batters, Rishabh Pant is currently at the highest spot. He is at number 5 with 801 points. The wicketkeeper slammed a century (146) in the first and half-century (57) in the seconds innings of Edgbaston Test.

England batter Jonny Bairstow also made a huge leap in the rankings. Before the New Zealand series in June, Jonny Bairstow was at the 47th spot. Now, after twin centuries at Edgbaston, the explosive batter is at the 10th position. Bairstow has 1218 runs at an average of 55.36 with 6 centuries in the current ICC World Test Championship cycle.

Among the bowlers, the England veteran James Anderson has moved to the sixth position. Anderson grabbed six wickets in the match against India, including a fifer in the first innings. Aussie spinner Nathan Lyon has also been rewarded for taking nine wickets in the first Test against Sri Lanka. Moving up by 5, Lyon is currently at the 13th spot.