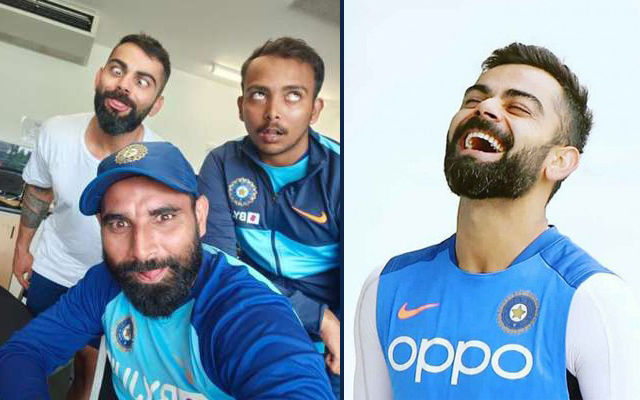 Team India batter Virat Kohli is one of the most loved cricketers all around the world. His batting exploits have earned him a massive fan following. The 34-year-old is also known for his aggression and antics on the cricketing field. However, he is also a funny character, who likes to keep things light off the field.

Virat Kohli’s huge fandom is evident from his fan following on social media pages. He has 206M followers on his Instagram profile, where he actively posts pictures from his personal life.

Apart from the brand advertisements and the behind-the-scenes photos, Kohli’s Instagram profile is also filled with hilarious pictures.  In this article, we take a look at five funny posts by Virat Kohli on Instagram.

Taking about Royal Challengers Bangalore’s campaign in the IPL 2022 season, they managed to qualify for the knockouts of the tournament. However, the Faf Du Plesis-led team lost in the second qualifier against Rajasthan Royals and were out of the tournament.

In a fun segment with Puma, Virat Kohli took the helium balloon challenge. He answered the most searched questions about him on social media, in the video. The Indian cricketer posted the clip on his Instagram to share the fun with his fans.

A meme with Virat Kohli as the professor from the famous Netflix series, Money Heist has been doing the rounds on social media. The Indian cricketer stated that he does look like the professor, but he hasn’t appeared in the series. The video was well-received by the fans, who enjoyed Virat Kohli’s ‘helium balloon’ challenge.

The covid-19 pandemic wreaked havoc all around the world. All the sporting tournaments and championships came to a halt, as the lockdown was enforced in many places. However, as things started to ease a bit, sports were resumed, but in a bio-bubble environment.

The Indian cricketers were put in a bio-bubble for every series, limiting their movements to just their hotels and the ground. The International series as well as the Indian Premier League took place in a bio-bubble. In one of his Instagram posts, Virat Kohli summed up how players feel in a bubble.

The Indian cricketer posted a picture of himself tied to a chair by a rope. It looked to be from one of the shoots. Kohli gave a cheeky caption to it, writing, “This is what playing in bubbles feels like.”

In another funny Instagram post, Virat Kohli shared a collage of his two pictures. One of them was from his childhood while the other was from the ICC World Cup 2019 match against Pakistan. The common thing about the two pictures was the former Indian cricketer’s pose.

In both photos, Kohli has kept his hands resting on his waist, and is looking up at. The Indian cricketer captioned it, “Doing it since the early 90s! 🤓”. Just a day before Kohli posted the image, he led the Indian team to a brilliant win over Pakistan in the ICC World Cup 2019.

Virat Kohli slammed 77 runs in the match off 65 deliveries including seven boundaries. In the innings, opener Rohit Sharma scored 140 runs to take India to 336. The match was reduced to 40 overs due to rain. Pakistan managed to score 212 runs in their innings, handing India an 89-run victory.

The selfie featuring Shami and Shaw was posted ahead of the Test series against hosts New Zealand in 2020. The former Indian skipper captioned it, “Naya post Sundar dost 🤪”.  Pacer Mohammed Shami also came up with a hilarious reply.