Post India’s marvellous comeback at the Melbourne Cricket Ground, Ravichandran Ashwin and Rohit Sharma were seen hilariously trolling Cheteshwar Pujara for standing up still in a group photo when all other players were posing in different poses.  The Indian team made an outstanding comeback at the Melbourne Cricket Ground after a debacle at the Adelaide Oval last week where they bundled out for a mere 36.

What made this win even more special was India went into this test without the likes of Virat Kohli, Ishant Sharma, Rohit Sharma and Mohammed Shami yet managed to pull off one of the greatest wins in test history, all thanks to stand-in skipper Ajinkya Rahane’s magnificent century which put India in control of the test match.

Though the win looked an easy one when we look at the scorecard as India just had to chase a target of 70 in the 2nd innings, it really wasn’t that easy as India lost Umesh Yadav due to a calf injury very early on day 2. The injury to Umesh meant India were down to four bowlers, two of them being spinners which put immense pressure on the spearhead of the bowling attack Jasprit Bumrah.

With the help of Mohammed Siraj, Ravindra Jadeja and Ravichandran Ashwin and Jasprit Bumrah, India managed to bundle out Australia for just 200 leaving India to chase a target of just 70 runs with over two days to go. India’s skipper Ajinkya Rahane was adjudged man of the match for his knock of 112 which gave India the initial boost in the test.

Post the completion of the match, Ravichandran Ashwin uploaded a group on his social media handles captioned as

“When your backs are up against the wall, lean back and enjoy the support of the wall!! Well done to the entire team and what a win that was”. 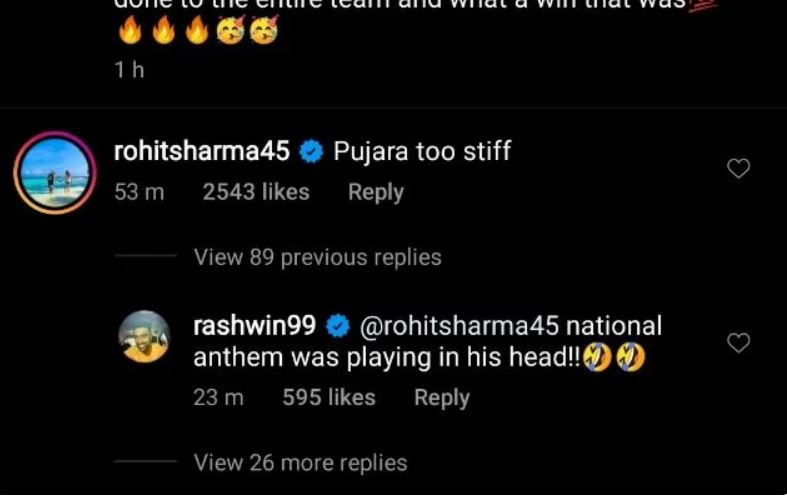 To Which Rohit Sharma hilariously trolled Cheteshwar Pujara for standing in a national anthem position when the rest of the players were seen posing in various different poses. Rohit Sharma commented on the post “Pujara too stiff.” To this, Ashwin replied, “National Anthem was playing in his head”.

IPL 2021 Mini Auctions: Top 5 Overseas Players Who Can Be Top Buys For Franchisees