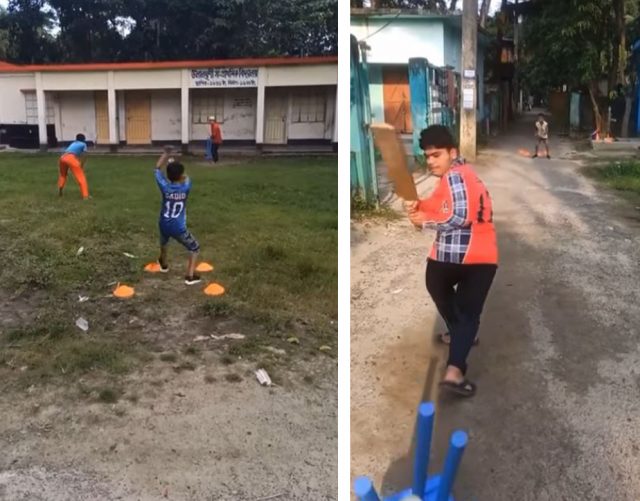 Former India cricketer and legend Sachin Tendulkar is mighty impressed with a young spinner bowling on the streets. He shared a video on his social media profile praising the cricketer.

The video features the spinner deceiving batters with his trajectory and accurate bowling. The video garnered many comments from the fans and cricketers praising the young spinner. Impressed by the young spinner’s skills and passion, Sachin Tendulkar wrote, “Wow! 😯 Received this video from a friend… It’s brilliant. The love and passion this little boy has for the game is evident. #cricket #special #children #spin.”

Former cricketer and Australian great, Brett Lee also praised the youngster by commenting, “The kid can play.” The spin wizard Rashid Khan, who is known for his ability to deceive even the best of the batters in the world too was very impressed with the cricketer in the video. He wrote, “skills” sharing fire emojis.  Rashid was part of the Sunriser Hyderabad in the Indian Premier League 2021 and will be representing his country at the T20 World Cup.

Meanwhile, the social media account of the Mumbai Indians too left a comment on Sachin Tendulkar’s post. Sachin was part of the franchise in Indian Premier League 2021 as a mentor. Mumbai Indians wrote, “This boy is spinning our heads.”

The young spinner also earned praise from actor Ranveer Singh, who wrote, “Bamboozled.” Ranveer will be seen playing the role of former India cricketer Kapil Dev skipper Kapil Dev in the movie 83′. The film is based on the 1983 World Cup and is set to hit the theatres on 24 December 2021.