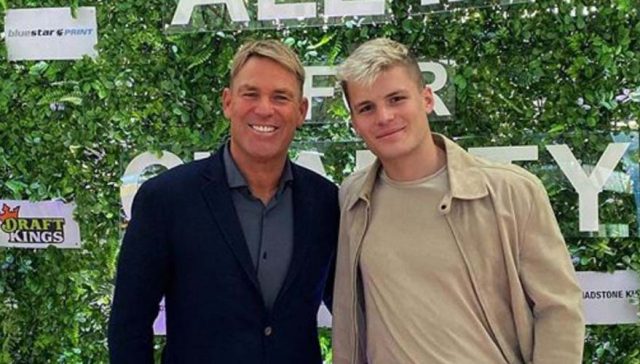 Shane Warne is reportedly battered and bruised after surviving a motorbike accident. He narrowly escaped any serious injury in the process. Warne was riding the bike with his son Jackson on Sunday. The accident was first reported by Sydney Morning Herald which said that Warne wanted to go to the hospital initially but then thought against it as he but changed his mind after waking up on Monday in pain.

“I’m a bit battered and bruised and very sore” said Warne after the accident. Warne fell down after losing control of his 300kg bike sliding down for about 15 meters after he fell. To make matters worse, the Aussie legend injured his hip foot and ankle. He was concerned with having damaged his hip and fearing his foot or ankle may have been broken.

Warne said that he would be ready in time for commentating on the upcoming Ashes series by the time the first Test starts on December 8 at The Gabba.

Warne had previously backed Pat Cummins to be the next Test captain for Australia. He said that Cummins is Australia’s poster boy while further saying that the Aussie pacer is at a perfect age as well where he can take up the leadership role and take the Australian test team forward for a few years.

“The poster boy, respected and loved the world over, Pat Cummins should now be named captain,” Shane Warne wrote in his column in Daily Telegraph.

JUST IN: Pat Cummins is officially the 47th captain of the Aussie Men's Test team #Ashes

Marnus Labuschagne Should Have Been The Next Vice-Captain: Shane Warne

Meanwhile, he slammed Cricket Australia for reappointing Steve Smith as the vice-captain of the side. Marnus Labuschagne should have been the next vice-captain as per his choice.

“We all love Steve Smith and are proud that he’s the best Test batsman in the world again. But he should not be the Australia vice-captain. Everyone makes mistakes, we know that and we’ve all moved on from sandpaper-gate. But what happened under Steve Smith’s captaincy, he allowed that to happen on his watch,” wrote Warne.