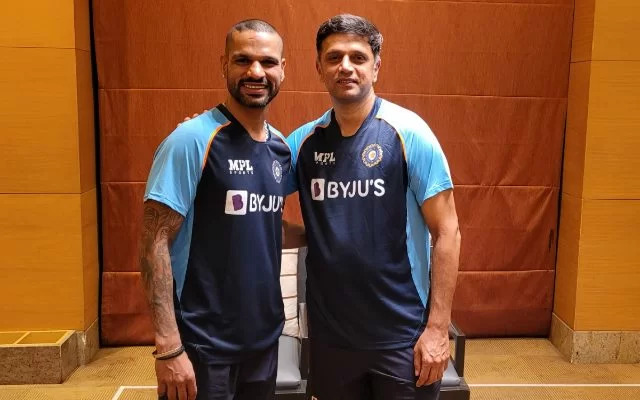 Star Indian opener Shikhar Dhawan will be leading the team on the Sri Lanka tour for the limited-overs series. The original captain of the Indian white-ball team Virat Kohli is currently busy with Test duties in England. Also, white ball vice-captain Rohit Sharma is in England for the five-match Test series.

However, a few weeks earlier The Board of Control for Cricket (BCCI ) announced a 20-member squad led by Shikhar Dhawan in Sri Lanka. Also, Team India included as many as 6 uncapped Indians in the team. India will lock horns with Sri Lanka in three One Day International and three T20 International games which will begin from 13 July and end on 25 July. All the matches of the tour are scheduled to be played in Colombo.

Meanwhile, former Indian Captain Rahul Dravid has been appointed as coach for the Sri Lanka series, because the Head coach is busy with Test duties and he is with the main team in England. While talking about being captain, Shikhar Dhawan said it’s a great honor for him to lead the national team. He also hopes on building a positive environment in the squad.

“It’s a great honor for me to be captain of the Indian team. I am looking forward to it. I’ve played under Rahul Dravid’s coaching once for India A. We sync together really well and looking forward to the Sri Lanka series. We’ll build a lot of positive things. The aim is to build a happy environment,” Shikhar Dhawan said in the pre-departure press conference.

Humbled by the opportunity to lead my country 🇮🇳 Thank you for all your wishes 🙏 pic.twitter.com/SbywALBTwZ

There is positivity, confidence in our team: Shikhar Dhawan

The India squad traveling to Sri Lanka is a great mixture of experienced and young cricketers. While discussing about the atmosphere around the squad, Shikhar Dhawan told the team is filled with confidence and excitement.

“This is a very good team. There is positivity, confidence in our team and everybody is confident that we will do well. There is a lot of excitement. It is a new challenge but at the same time, it is a great opportunity for all of us to show our talent.

“Everybody is waiting (for the tour to begin). 13-14 days have passed since we are in quarantine, so the players are waiting when we can hit the ground and we have 10-12 days for preparation. The team is a nice blend of experience and youth,” added Shikhar Dhawan.